Istanbul, Rotterdam can 'no longer be sister cities' 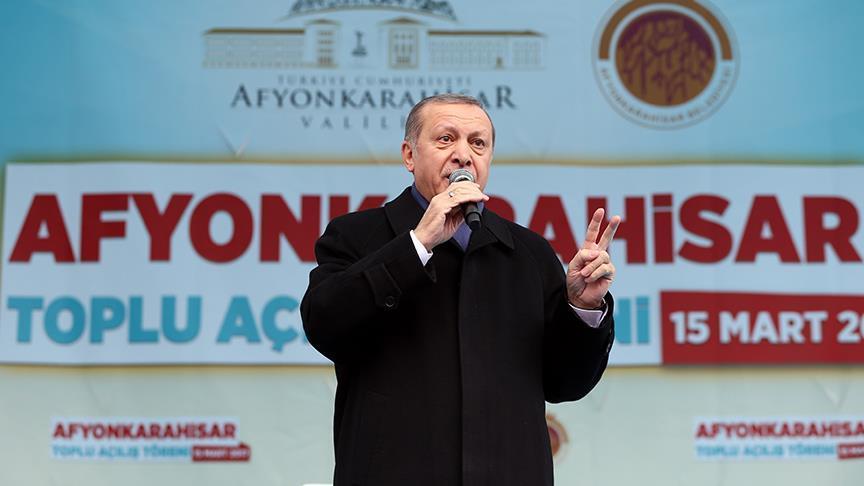 Addressing a public rally in the central Anatolian province of Afyonkarahisar, Erdogan asked Istanbul’s mayor to end its pact with the Dutch city unilaterally.

"We cannot have sister cities with such people," he said.

According to Istanbul municipality’s website, the pact with the Dutch city was signed in 2005.

The president said Europe’s fear of Turkey and Islam was driving its anti-Turkish moves.

"Europe is getting lost in its fears," he said. "They are afraid and hostile towards everything which is different from them," he added.

He reiterated his accusation about the complicity of the Netherlands in the Srebrenica massacre and added the Dutch did similar things to Jews, Romans, and even to people from different branches of Christianity in the past.

"Europe has no right to give lessons of democracy, freedom, justice and law. The spirit of fascism is spreading in the streets of Europe.

"We will continue to defend democracy, human rights and the law against racism in Europe, which needs those values more than us," he added.

The president also accused the Netherlands of having double standards in its approach to Turkey.

"You are permitting the No campaigners [in the upcoming referendum in Turkey]. Why do you close the doors to Yes campaigners?" he asked.

He also rejected claims made in the German-language Swiss newspaper, Blick, which called for a No vote “against Erdogan’s dictatorship” on Sunday.

"It [the referendum] has nothing to do with my personality. This is about a change in the system [of governance]," he added.

The president encouraged the public to vote Yes in the upcoming April 16 referendum on constitutional reforms.

Next month, the electorate in Turkey will be asked to vote Yes or No to an 18-article reform bill, which would also change the current parliamentary system to a presidential one. The Yes campaign is backed by the ruling Justice and Development (AK) Party and the opposition Nationalist Movement Party (MHP).