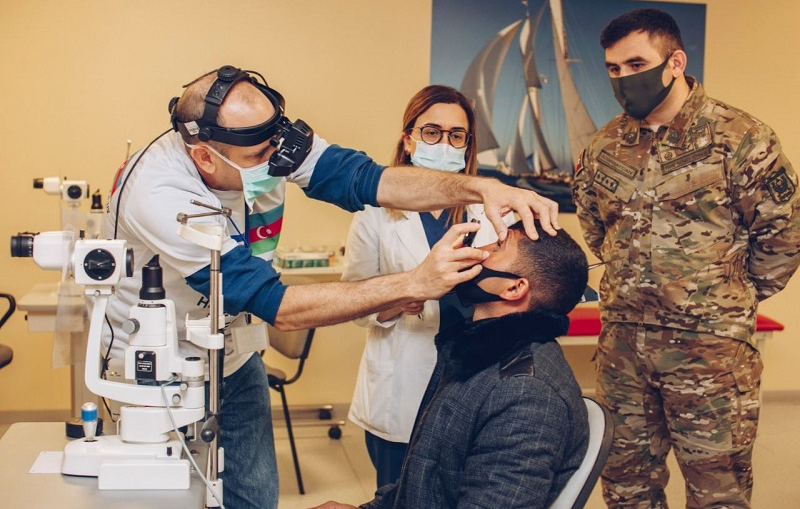 News.Az presents the article by Durdana Aghayeva, an Azerbaijani woman with a special connection to Jewish communities across the world, particularly in Los Angeles.

Israel and Azerbaijan are two allies in regions overwhelmed by conflict and violence, and we share in many things and weather similar storms. We are long-term partners in trade and security, allies in our shared fight against extremism, and we share values of tolerance, progress and respect for the preciousness of every human life. And in recent weeks, we have shared medical miracles, as a team of volunteer surgeons from Israel were in Baku, performing complex eye surgeries and treatments on Azerbaijani soldiers, home and badly injured from the recent war in Karabakh.

The team of Israeli medical specialists, headed by Dr. Yishay Falick, CEO of Jerusalem’s Misgav Ladach Hospital, treated over 150 Azerbaijani veterans, mostly operating in the field of oculoplasty (plastic surgery for the eyes and adjacent parts) and carrying out procedures such as eye socket restoration, eyelid surgery, prosthetic eyes (at least 25 of them) and more. This humanitarian mission of Israeli volunteer doctors, including leading ophthalmologists and neurologists, was organized at the initiative of the Azerbaijani organization YASHAT, which was recently established to help the disabled war veterans as well as the families of soldiers killed in battle. The mission was supported by Azerbaijan’s renowned Zarifa Aliyeva National Ophthalmological Center and the Israeli Embassy in Baku. The delegation was supported in Israel by, among others, Health Minister Yuli Edelstein and Minister of Foreign Affairs Gabi Ashkenazi.

The Israeli doctors joined the mission on a completely voluntary basis, closing their private clinics in order to participate in this important medical humanitarian operation.

“The young soldiers we met sustained terrible injuries – most were unable to leave the house due to facial deformities,” said Dr. Falick. According to Baltimore Jewish Life, the doctors also adjusted the prostheses to restore the soldiers’ faces, allowing them to return to a more normal routine, even in cases where it was impossible to restore their sight. In a number of cases, the doctors were able to restore sight to the injured soldiers. One notable case was that of soldier Arif Hajiyev, who lost his sight when he was wounded by an exploding shell that left him able to distinguish only between light and darkness. The surgery, which lasted several hours, included the removal of traumatic cataracts, insertion of an intraocular lens and transplant of a corneal, donated by an Israeli woman belonging to her late husband. After several days in recovery, Arif regained his ability to read. His father tweeted: “Thanks to the talented doctors during the operation they performed, my son Arif Hajiyev regained full vision.”

Another soldier, who got an eye prosthesis, tweeted his picture with the words “My new eye has arrived”.

The Israeli team was quite impressed by Zarifa Aliyeva National Ophthalmological Center, where all surgeries and treatments were performed, and Dr. Falick described it as the largest eye center he had ever seen, with state-of-the-art equipment.  In an interview with Israeli I24 News television station, Dr. Falick shared why this medical mission is particularly special to him: “In Azerbaijan, we feel at home, we feel like a family. Everybody is warmhearted to Israel and Jews. They don’t have prejudices. There is mutual love.”

Hikmet Hajiyev, assistant on foreign policy to Azerbaijan’s President, tweeted: “We are thankful to Israeli medical team and Embassy of Israel for providing health support in ophthalmology for our wounded soldiers/officers. It is also a sign of friendship between our countries. “Whoever saves one life, saves the world””

And Israel’s Ambassador to Azerbaijan, George Deek said: “This is the spirit of the friendship between Israel and Azerbaijan. We want to help these people to restore their health, their self-confidence, and their ability to go back and live a good, normal, and decent life in their homeland, Azerbaijan.”

As a survivor of war, I know the tragic pain that comes with enduring injuries. And I know very well what it means to begin to heal, especially when the healing is administered by the best and most caring doctors available. So it is only fitting that our injured soldiers should be healed by such a force of love as the delegation of Israeli doctors. It is a force of love that permeates between our two nations, one that is built on a deep intimacy, of shared hope and the courage that our nations are blessed with, to stand up against what is violent and join together to bring good into the world, despite the challenges and the odds.