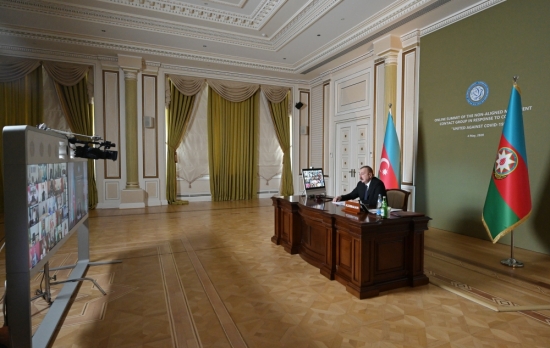 Thanks to the policy and strategy carried out by President Ilham Aliyev over the past 16 years, Azerbaijan has become a unique secular country and a true beacon of progress in the Islamic world, Arye Gut, a famous Israeli expert on international relations, told News.Az.

He made the remarks commenting on an online summit of the Non-Aligned Movement Contact Group in response to Covid-19, which was held May 4 on the initiative of Azerbaijani President Ilham Aliyev. Held under the motto "United against COVID-19", the Summit focused on the fight against coronavirus pandemic.

The expert noted that Azerbaijan, where Western pragmatism and eastern hospitality and tradition are closely intertwined, has ensured its development at a high economic pace.

He said that the spread of the novel coronavirus has become a real test for those who are used to living and working in the modern globalized world.

“So, Azerbaijan became a striking example of this. Azerbaijan’s initiative to hold a summit through videoconference once again indicates the country’s serious and attentive attitude to its international obligations. Today, in the post-Soviet space there is no second country like Azerbaijan, which not only promotes such important initiatives, but chairs the Non-Aligned Movement, one of the largest international organizations,” Gut said.

The expert stressed that the NAM summit is another indicator of confidence in and respect for Azerbaijan’s international image and authority.

"The participation in the summit of heads of state and government, foreign ministers of about 40 countries, the chairman of the UN General Assembly, the WHO Director General, a video message from the UN Secretary General and the High Representative of the European Union, the Vice President of the European Commission, as well as words of gratitude regarding the Azerbaijani president’s activities for the organization of the high-level event, as well as for a serious and effective contribution to the fight against the pandemic are a wonderful example of the high authority of Azerbaijan and its leader in the international arena,” he added.

The Israeli expert said that President Ilham Aliyev has turned the capital city of Baku into an international arena and an “intellectual Davos” for international humanitarian cooperation. “Not only the local population, but also Azerbaijanis living abroad are proud of this fact.”

According to him, a NAM working group to be created on the Azerbaijani president’s initiative will bring the humanitarian and medical needs of member countries into a single information database in connection with the pandemic.

“Taking a worthy step, President Ilham Aliyev demonstrated to the whole world that the pandemic can be defeated only through global cooperation and solidarity. The Azerbaijani leader called on all countries to friendship, solidarity and mutual support,” Gut concluded.

The Non-Aligned Movement is the second largest international organization after the UN. Today, about 55% of the world's population live on the territory of the member countries of this international organization. These states possess 75 percent of the world's oil reserves, more than 50 percent of the natural gas reserves, as well as gigantic human and natural resources.