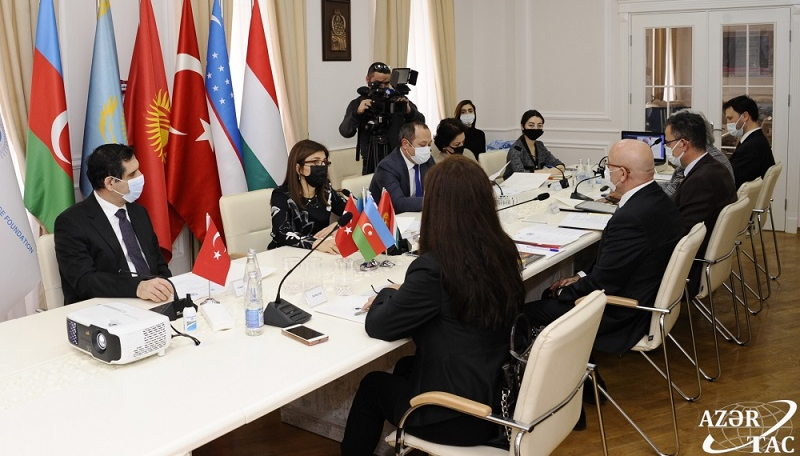 A conference on “The Past, Present and Future of Karabakh” has been held as part of the cooperation between the International Turkic Culture and Heritage Foundation and the Union of Engineers and Architects of the Turkic World.

During the conference, the damage caused to historical, cultural, religious monuments, art samples located in the Nagorno-Karabakh and adjacent regions - an integral part of Azerbaijan and the entire Turkic world as a whole, as well as proposed projects in this direction were discussed. The conference was also held in an online format.

In her opening remarks, President of the International Turkic Culture and Heritage Foundation Gunay Afandiyeva said: “After the glorious Victory, Karabakh united all the Turkic peoples even more. 44 days together with the victory restored our national identity and instilled a sense of pride in the Azerbaijani people and the entire Turkic world. Friendship, brotherhood and solidarity between Azerbaijan and Turkey at the level of heads of state have become an example for the whole world.”

Gunay Afandiyeva noted that the International Turkic Culture and Heritage Foundation and the Union of Engineers and Architects of the Turkic World have established fruitful cooperation. She said that the mission of the organization she heads is to preserve, study and show the whole world the rich history, culture and traditions of the Turkic world. “The state of the cities, which have been under occupation for almost 30 years, has greatly shocked us. We visited Fuzuli and Aghdam districts liberated from the occupation several times and were living witnesses of the deplorable situation there. At one time these cities were the cultural centers of Azerbaijan. Shusha, Aghdam, Fuzuli, and in general Karabakh are the birthplace of many composers, khanandas (singers), poets and writers, as well as masterpieces of Azerbaijani architecture. I regret to declare that Armenia has destroyed most of the historical architectural examples that have been protected by Azerbaijan for hundreds of years. Aghdam was subjected to terrible destruction, and Fuzuli was completely razed to the ground. The inscriptions of the period of Caucasian Albania were erased, Armenian crosses were attached to them and presented to the whole world as Armenian monuments. And also trees were cut down, ecological terror was committed. In this regard, the International Turkic Culture and Heritage Foundation issued statements strongly condemning these criminal acts, calling on the world community to objectively assess these events”, Gunay Afandiyeva added. 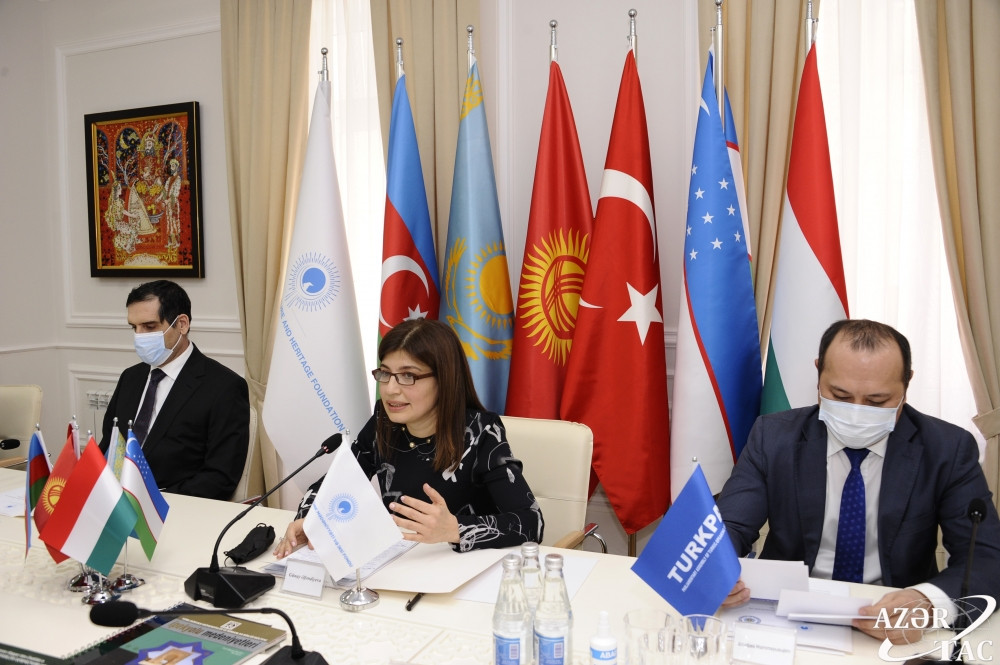 Speaking at the event, Secretary General of the Parliamentary Assembly of Turkic-Speaking Countries (TURKPA) Altynbek Mamayusupov emphasized that the entire Turkic world happily met victory in the 44-day Patriotic war. He noted that the goal of TURKPA is to contribute to activities aimed at further expanding inter-parliamentary cooperation, interstate political dialogue, harmonization of legislative acts and the development of mutually beneficial, equal cooperation between Turkic-speaking and other countries. He noted that the structure he represents, during the annual plenary sessions, strives to make decisions that are useful for our peoples and states. The TURKPA Secretary General also expressed readiness to cooperate in the development of all necessary technical infrastructure in the field of urban planning.

Azerbaijani Ambassador to Turkey Khazar Ibrahim expressed gratitude to the President of the International Turkic Culture and Heritage Foundation Gunay Afandiyeva for organizing such an important event. Touching upon the friendship between Azerbaijan and Turkey, the Ambassador noted that the relations between the two brothers have a solid foundation, a glorious present and a bright future. The Ambassador also stressed his attitude to the issue of destruction, plunder, appropriation of material and cultural monuments located in Nagorno-Karabakh and spoke about possible work in this regard.

Turkish Ambassador to Azerbaijan Erkan Ozoral stated that Turkey and Azerbaijan are two states and one nation. Back in the 1990s, Turkey has always supported Azerbaijan in its most vulnerable position, since the occupation of Karabakh. During the 44-day war, Turkey once again showed that Turkey's pain will not subside until the Karabakh wound heals. For 30 years, Turkey has made it clear to the whole world that it will always stand by the fraternal state of Azerbaijan. Now the whole world knows that Turkey and Azerbaijan are one heart. The main task facing Azerbaijan is the return of citizens expelled from their ancestral lands to their homes, the restoration of Karabakh - Caucasian Hiroshima and bringing it to a livable state. Turkey is ready to provide all possible support in this regard. 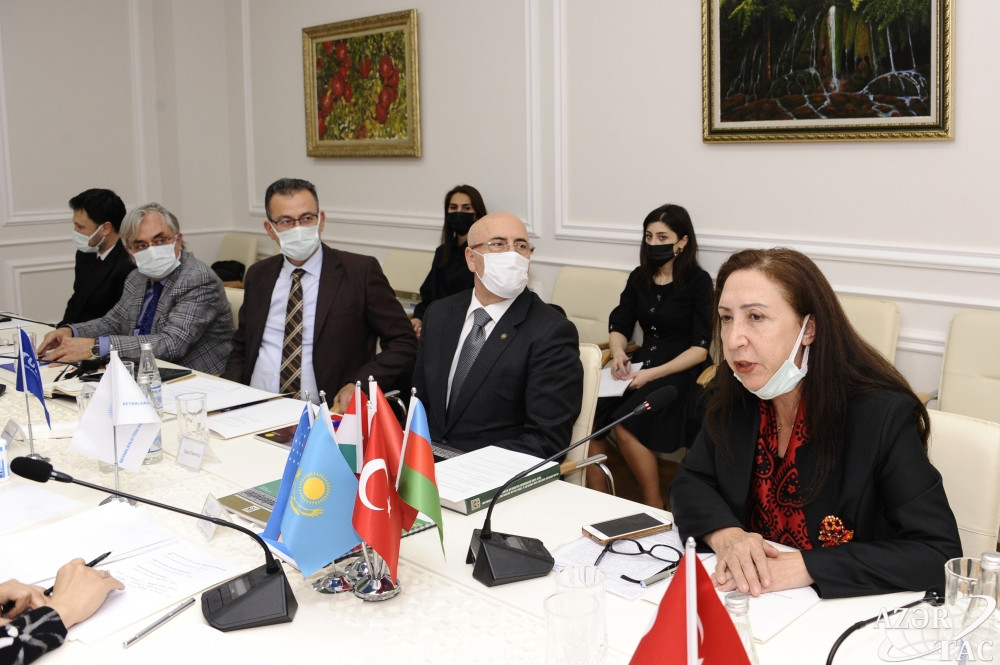 Addressing the event, Deputy Chairman of the State Committee for Urban Planning and Architecture of Azerbaijan Ilgar Isbatov noted that the structure he represents has started work on the restoration and planning of cities and villages in the liberated territories. “The headquarters and other centers for the restoration of destroyed places are already operating in Karabakh, and their direct task is to deal with urban planning issue,” he said. He noted that the structure presented by him provides for the preparation of a development plan for 1 million 350 thousand hectares of land liberated from occupation, and also plans to organize work on the collection and systematization of data on the territory, which includes about a thousand cities and villages. “At present, operational steps are being taken in this direction”, Ilgar Isbatov emphasized.

Speaking at the conference, Deputy Minister of Environment and Urban Development of the Republic of Turkey Mujait Demirtas called the liberation of Karabakh a historic Victory. "Yesterday the whole world was talking about the occupation of Karabakh, and today-about an epic victory. And in the future, the world will talk about the revival of Karabakh, which Turkey and Azerbaijan together will provide", he said. The Deputy Minister also noted the importance of joint work, and stressed that the symbol of unity of the two countries will be more and more confirmed every day.

Speaking at the conference, Secretary General of the Union of Engineers and Architects of the Turkic World Ilyas Demirchi, Rector of the Azerbaijan University of Architecture and Construction Gulchohra Mammadova, Rector of Gazi University Musa Yildiz, Head of the Central Department of the Union of Engineers and Architects Murad Koru and other participants shared their views on this topic and discussed plans for the future.

At the end of the conference, the participants were presented with certificates and gifts.