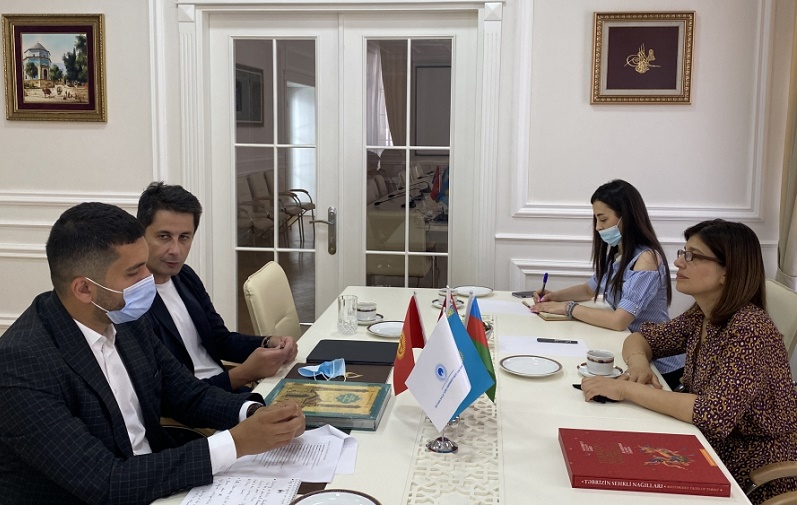 A meeting has been held between President of the International Turkic Culture and Heritage Foundation Gunay Afandiyeva and Secretary General of the Nizami Ganjavi International Center Rovshan Muradov.

Gunay Afandiyeva highlighted the activities of the Foundation, and noted that various projects are being implemented, conferences, round tables are being arranged, books are being published by the organization in order to promote the ancient and rich culture of the Turkic world, popularize it in the international arena, and transfer to future generations.

Gunay Afandiyeva stressed that the announcement by President Ilham Aliyev of 2021 as the “Year of Nizami Ganjavi” is a dignified step in the cultural life not only of Azerbaijan, but also of the Turkic world as a whole. Gunay Afandiyeva noted that within the framework of the "Year of Nizami Ganjavi" various works are being carried out by the Foundation in the direction of implementing various events, projects, as well as publishing books dedicated to the great poet. President of the Foundation noted that she closely follows the work done by the Nizami Ganjavi International Center and stressed the importance of the conference "South Caucasus: Prospects for Regional Development and Cooperation" organized by the Center on May 20 this year with the participation of President of Azerbaijan Ilham Aliyev. She also emphasized the significance of the fact that the head of state, with all openness and truthfully conveyed historical realities to the world.

Secretary General of the Nizami Ganjavi International Center Rovshan Muradov thanked Gunay Afandiyeva for hosting the meeting. He noted that the Center is an organization that unites former heads of state and government, influential international experts from various countries and conducts global events for the establishment of peace and justice, equal coexistence, including the preservation of the rich heritage of Nizami Ganjavi.

Hailing the activities of the International Turkic Culture and Heritage Foundation on the study and protection of the material and cultural heritage of the Turkic-speaking peoples, Rovshan Muradov stressed the importance of cooperation between the Foundation and the Center, and expressed confidence that in the future the partnership will make a main contribution to the expansion of relations between the organizations. He also noted the need to arrange a number of projects within the framework of joint cooperation between the International Turkic Culture and Heritage Foundation and the Nizami Ganjavi International Center related to the popularization and promotion of the rich creativity of the great poet of the Turkic world Nizami Ganjavi.

The sides then exchanged keepsakes.