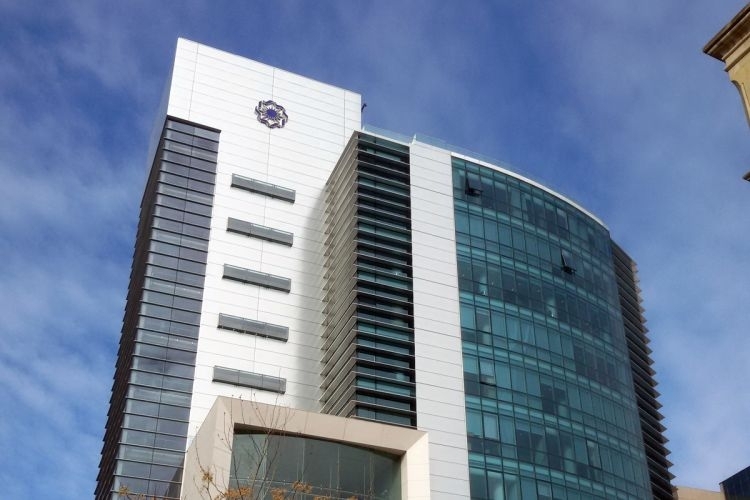 The International Bank of Azerbaijan (IBA), the country’s largest lender, has filed an appeal to the New York court for aid in the restructuring of some $3.3 bi

If approved by a judge, the bank would benefit the U.S. relevant law, including protections that halt lawsuits and otherwise prevent interference from creditors.

The bank, which is majority owned by the Azerbaijani government, says it has taken substantial losses in recent years, despite several capital infusions. According to court papers, the bank has transferred billions of dollars in bad loans to a separate, government-backed bank—much like the U.S. did during the global financial crisis—but those steps have proven insufficient.

In court papers, lawyers for the bank say getting approval of U.S. petition is critical to both the bank and the larger economy of Azerbaijan, said WSJ.

The bank says that while it has no operations in the U.S., it routinely uses four correspondent bank accounts in the U.S., which currently hold about $50 million.

The bank has requested a June 7 hearing on approval of its petition. In his statement, Mr. Sharifov said a meeting with the bank’s investors is planned for May 23 in London.

The bank is represented by White & Case LLP in the proceeding. Judge James L. Garrity Jr. will oversee the case.

The bank told APA-Economics that White & Case LLP representatives are on a trip to Baku to closely contact with the managements of the bank, Finance Ministry and the Financial Market Supervision Authority.

Bloomberg earlier reported that under a restructuring plan published on Friday, the International Bank of Azerbaijan said its “designated financial indebtedness” was at $3.3 billion as of April 18. It missed a principal and interest payment on a $100 million subordinated loan on May 10, according to an emailed statement from the government-owned lender on Thursday. The matter is about $715 million loan attracted from Cargill Financial Services International Inc.

The bank earlier said that the state has already acquired its toxic assets worth 9.93 billion manat, to provide liquid support in the bank placed deposits of $ 1.3 billion and 70 million manats. In addition, to facilitate the bank's capital position in January 2017, part of the deposits in the amount of AZN 600 million placed in the bank by the state were aimed at increasing the capital.

Although these measures strengthened the bank's financial and liquid position, high interest payments, the devaluation of manat against major foreign currencies, the incompleteness of the state's acquisition of toxic assets caused additional AMB losses. As a result, according to the results of 2016, according to the international financial reports, it is expected to disclose the damage of the International Bank Group (including the bank's subsidiaries) in the amount of 1.9 bn manats and damage to the İBA in the amount of 1.74 billion manats.

To restore the long-term financial position and stability of the AMB, turning it into a healthy and strong financial institution supporting the country's economy, the bank's leadership, in conjunction with the Azerbaijani government, continues measures to improve the bank's financial health. The next stage of the health process is expected to be voluntary restructuring of liabilities. Within the framework of voluntary restructuring of liabilities, it is planned to directly transfer to the state debts in foreign currency, attracted from certain financial institutions in accordance with the law "On Banks".

The plan for voluntary restructuring of obligations was coordinated with the F in accordance with banking legislation and on May 4, 2017, the Nasimi District Court decided to start the restructuring process.

It is planned to implement the restructuring plan on the basis of the approval of at least 2/3 of foreign creditors during the planned meeting.

Before the completion of the transfer of debts to the state, the fulfillment of obligations (excluding interest payments on trade financing transactions) in foreign currency, attracted from foreign creditors, is suspended.

All other obligations of the bank, including protected, unprotected, term deposits and demand deposits of Azerbaijani citizens, legal entities and other non-residents, which are stored in national and foreign currencies.

As a result of the measures taken, the bank’s currency position is resolved, the financial position will be strengthened, and the ability to generate profit will be restored. Also, the capital position of the bank will return to the regulatory framework.

"There is concern about the weakening of the financial and capital positions of IBA. Restoring the financial stability of an IBA is important for the provision of financial services, which is of great importance for the economy of the republic. The current measures are an important step to ensure financial stability and these measures are fully supported by the Ministry of Finance. The Finance Ministry hopes that IBA lenders in foreign currency will support the restructuring plan. The state takes a big step for the bank and in fact, increasing the national debt, accepts the debts of the IBA. At the same time, the Ministry of Finance notes that there will be no impact from the proposed restructuring plan on the IBA's depositors and the bank will continue to provide services and carry out operations in the same form", Minister of Finance Samir Sharifov said.

The IBA recovery process is carried out under the consecutive supervision of the Financial Market Supervision Authority of Azerbaijan (FIMSA).

"The IBA restructuring plan serves to strengthen the financial position and liquidity. IBA, being the largest bank of the country in terms of financial indicators, plays an important role in making settlements and social payments, providing the population with banking services a wide range and issuing loans to entrepreneurs. Therefore, we positively perceive the efforts of the Ministry of Finance to stabilize the bank's financial position and ensure sustainability. We believe that this step is important not only for the bank, but, in general, for the entire banking sector of Azerbaijan. The restructuring plan will not affect IBA obligations to local legal entities and individuals. The FIMSA will ensure that the rights of creditors and depositors of the bank are not violated and that they freely use their means", said the chairman of the Board of Directors of the FIMSA Rufat Aslanli.

"As noted in the financial results of 2016, the IBA is currently in a difficult financial situation. Despite this, I believe that, with the support of our creditors, the financial stability of the IBA will be ensured in the future. I express my gratitude for the support of the Ministry of Finance and the FIMSA under the current situation of the IBA. I want to convince the IBA's corporate and individual clients that the restructuring plan will not affect them in any way. In addition, our services and operations will remain outside this process", said Khalid Ahadov, Chairman of the Board of the IBA.

As a result of all these measures, the long-term financial stability of the IBA will be ensured and on the eve of privatization the market value will grow.