In photos: Finding joy amid pandemic's anxiety and heartache 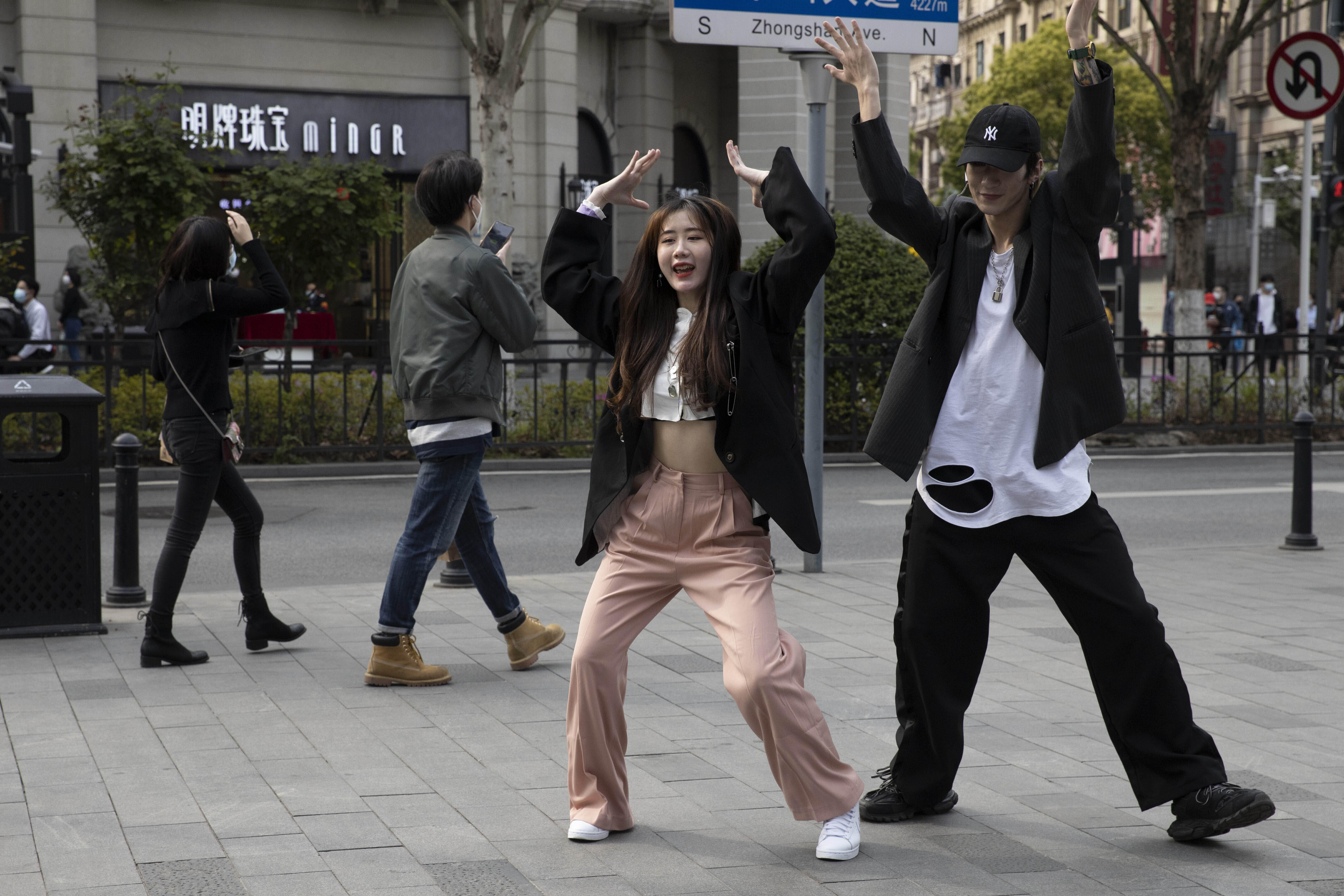 Joy is visible during the pandemic, just not with the usual, recognizable cues. Is a laugh or smile any less heartwarming if it’s hidden from view? Are eye c

Associated Press photographers, tasked with reporting on the crisis, have looked for bliss, as well. And amid so much heartache and anxiety, they’ve found it.

There’s no mistaking the kinship between humans and pets in the image taken in Silvio Pettirossi International Airport in Asuncion, Paraguay. Dumas the Labrador doesn’t know the passenger heading to Miami, but they greet paw to hand and nose to nose.

Just being able to inhale deeply is a universal theme of contentment. In Beijing, after two months of staying inside, a man pushes aside his mask and throws his arms wide as he stands alone to enjoy spring among the cherry blossoms in Beijing’s Yuyuantan Park.

There is joy in marking milestones -- and in the ingenuity it takes to do so, under the circumstances. Husband and wife in Annapolis, Maryland, marking their 56th wedding anniversary with a quiet at-home day of isolation, are surprised by family and friends with a honking convoy to celebrate.

And there remains joy in routine. Separated by balconies and ground-floor shouting distance, employees at the Vi at the La Jolla Village retirement complex in San Diego maintain nearly daily aerobics sessions. Senior residents participate from their patios, stories above.

There are other moments of exultation specific to this time: the ovations with which the public rewards health care workers for their kindness and courage, and their grateful response. Long after the words “social distancing” fade from memory, the sound of that applause will resound. 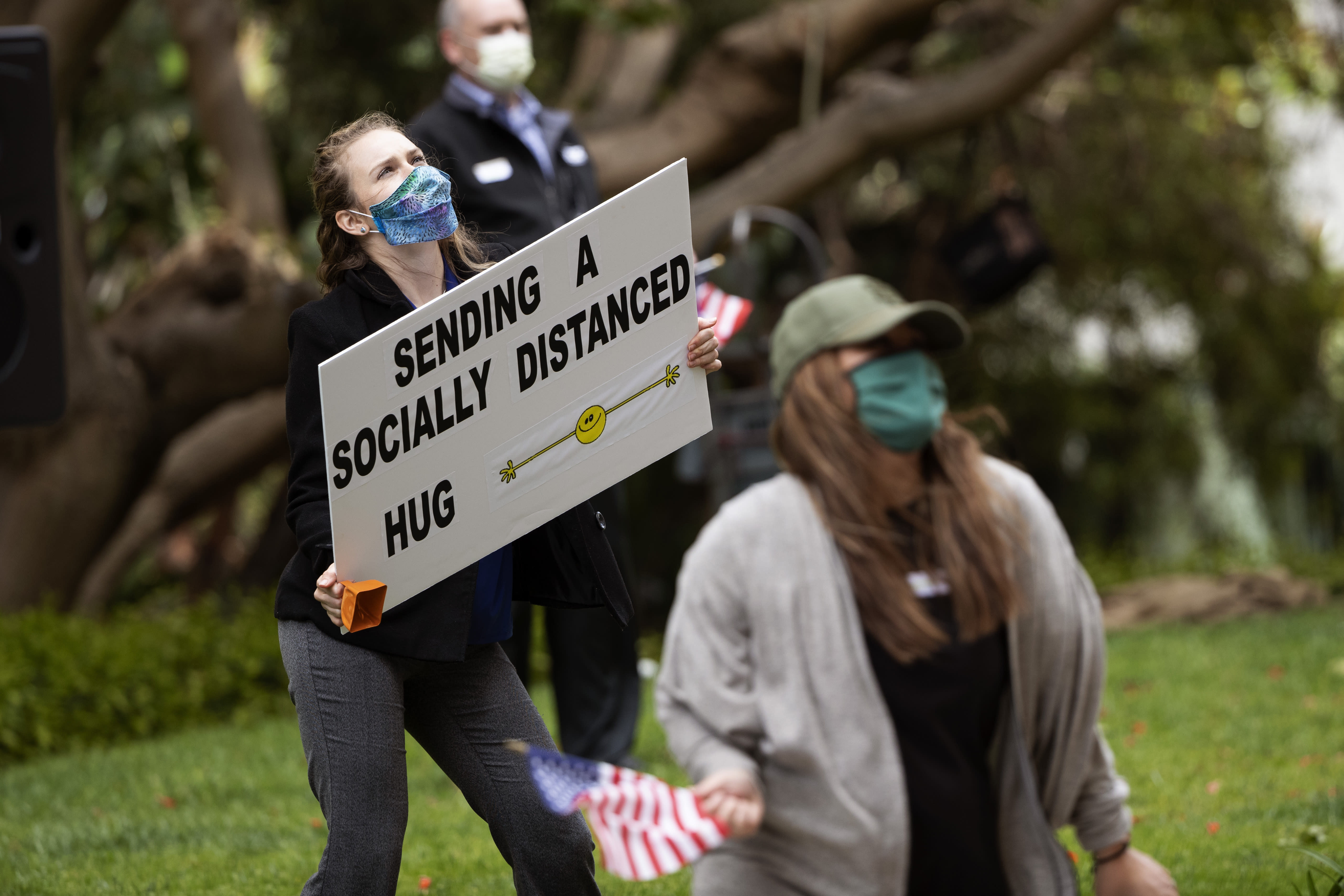 Employees of Vi at La Jolla retirement complex hold signs and wave flags for the residents during an afternoon pep rally, April 8, 2020, in San Diego. As elderly residents who have been quarantined for weeks make their way out onto their balconies, employees below dance, wave flags and shout words of encouragement in a now almost daily afternoon pep rally. (AP Photo/Gregory Bull) 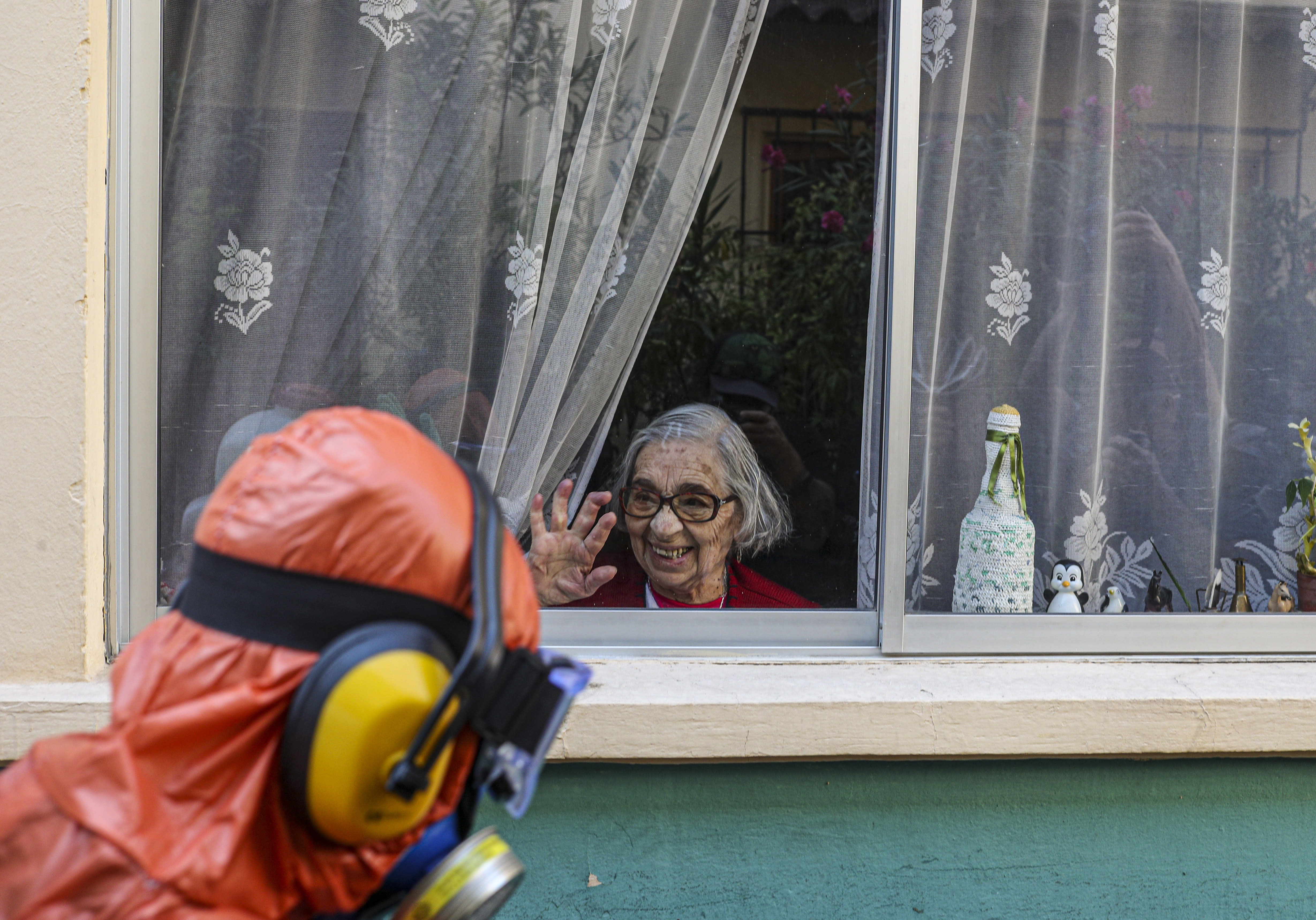 A woman waves to a city worker dressed in a hazmat suit as he disinfects the streets in her neighborhood as a precaution against the spread of the new coronavirus, in Santiago, Chile, April 15, 2020. (AP Photo/Esteban Felix) 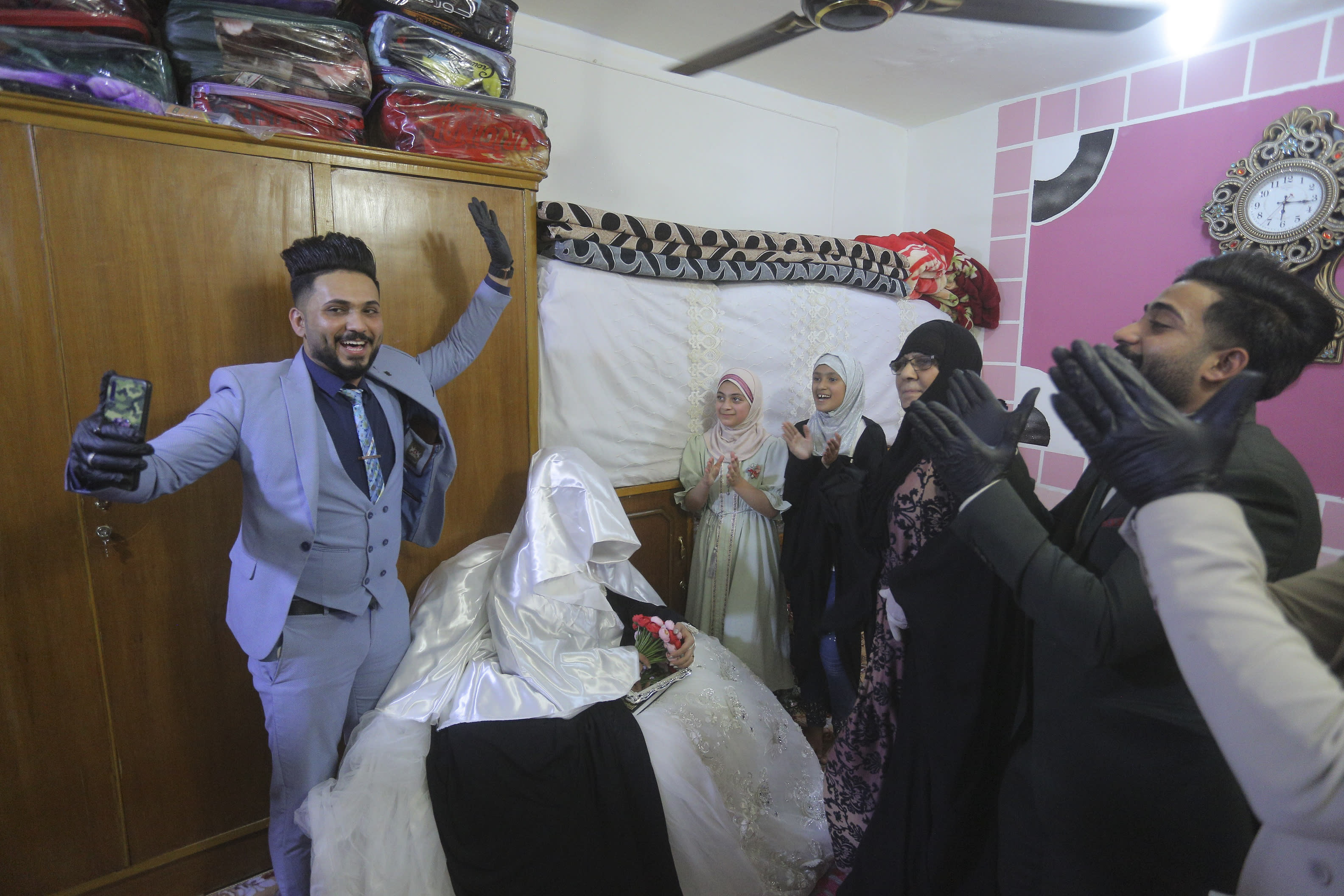 Ahmed Khaled al-Kaabi and his bride Ruqaya Rahim celebrate their wedding in Najaf, Iraq, April 9, 2020, the hardest hit town by coronavirus in the country where government banned large public gatherings. Unwilling to postpone the wedding, al-Kaabi asked the local security forces to help him wed his beloved. The police responded by providing the groom vehicles blasting music to bring his bride to the family home for a small celebration of just six people. (AP Photo/Anmar Khalil) 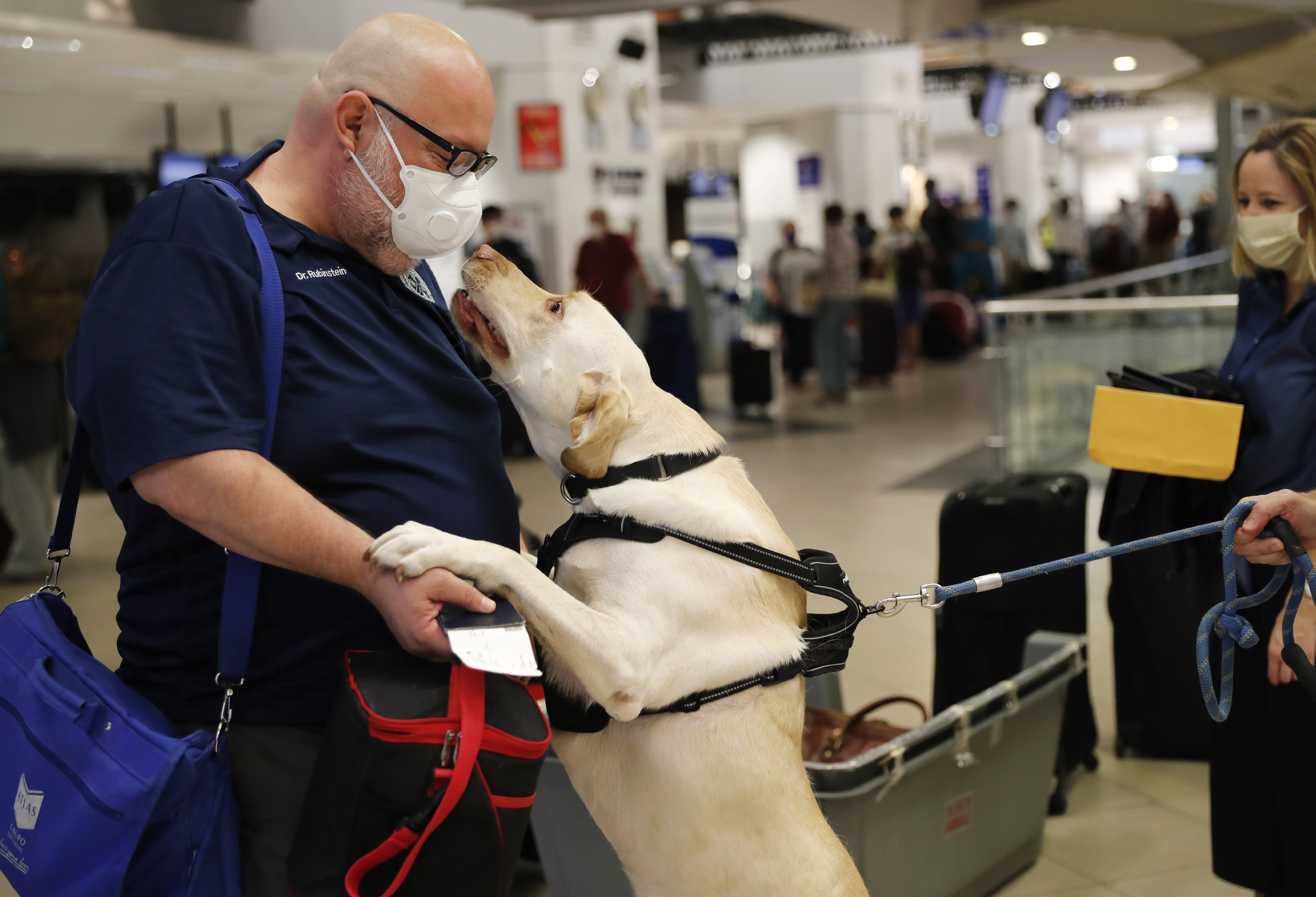 Dr. Rubinstein gets a greeting from a fellow American passenger's dog, named Dumas, as people prepare to board a flight to Miami, Fla., from the Silvio Pettirossi airport in Luque, on the outskirts of Asuncion, Paraguay, April 23, 2020. (AP Photo/Jorge Saenz) 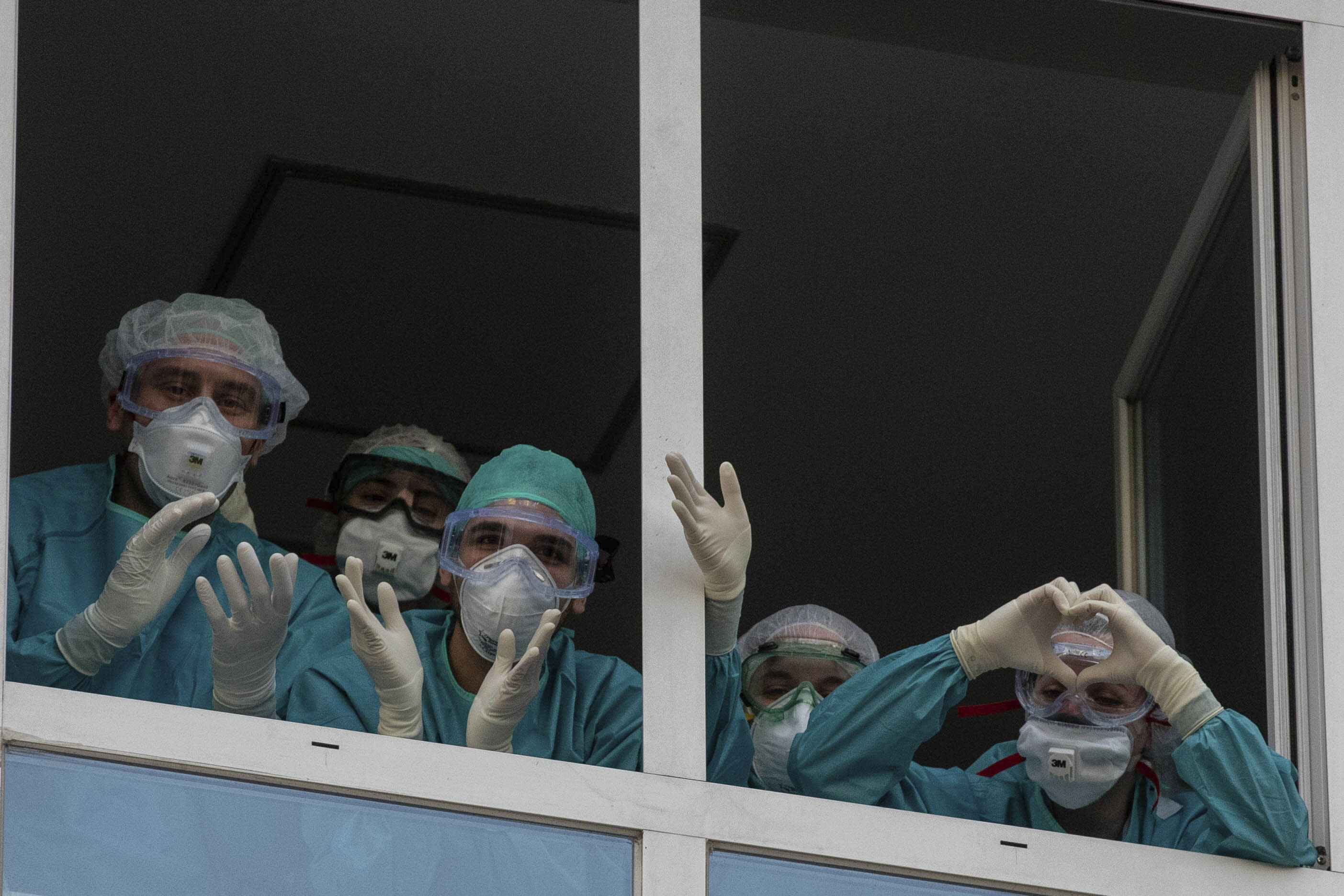 Health workers react as people applaud from their nearby houses in support of the medical staff that are working on the COVID-19 virus outbreak at the Jimenez Diaz Foundation University Hospital in Madrid, Spain, April 15, 2020. (AP Photo/Manu Fernandez) 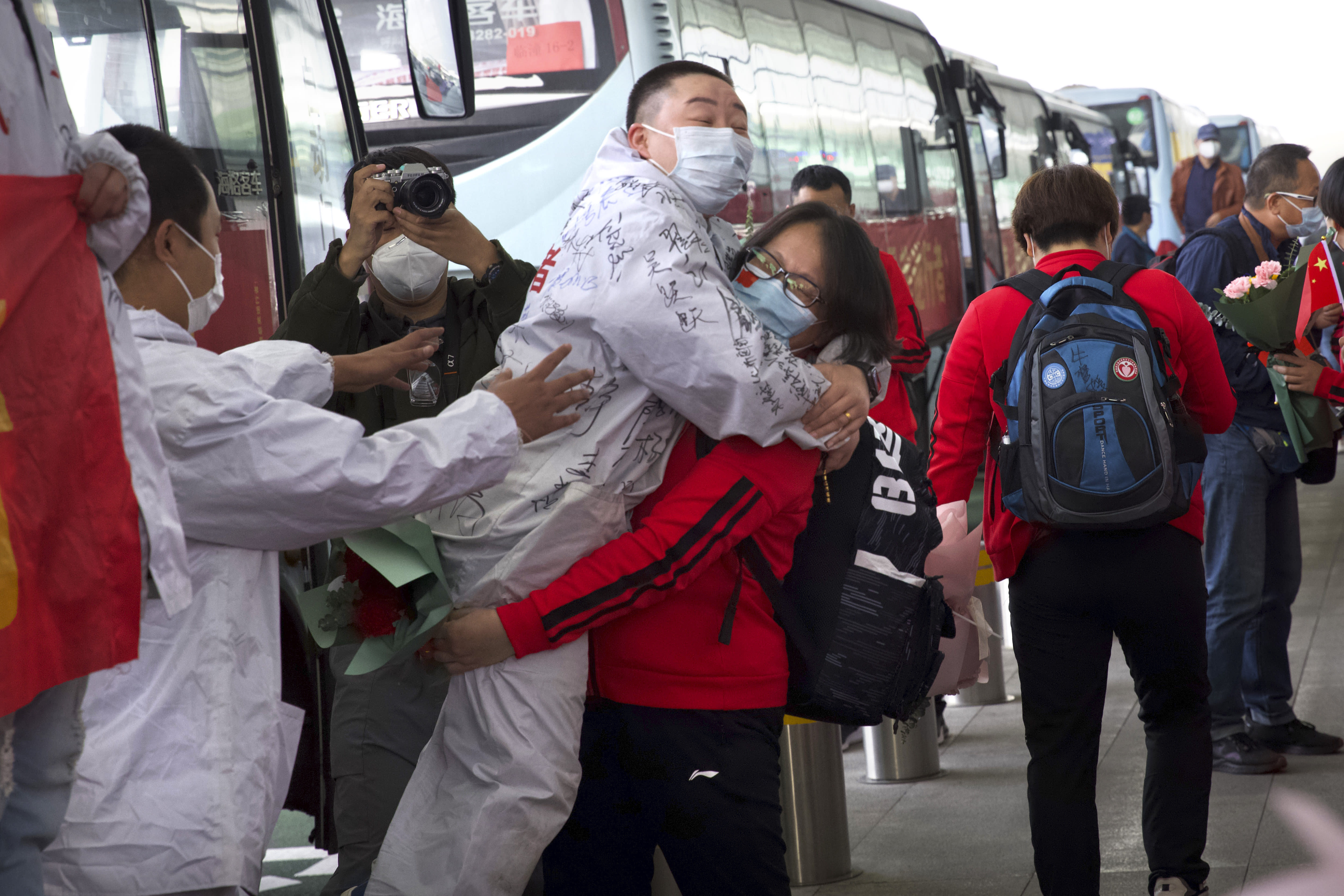 A medical worker from China's Jilin Province, in red, embraces a colleague from Wuhan as she prepares to return home at Wuhan Tianhe International Airport in Wuhan in central China's Hubei Province, April 8, 2020. Within hours of China lifting an 11-week lockdown on the central city of Wuhan, tens of thousands people had left the city by train and plane alone, according to local media reports. (AP Photo/Ng Han Guan) 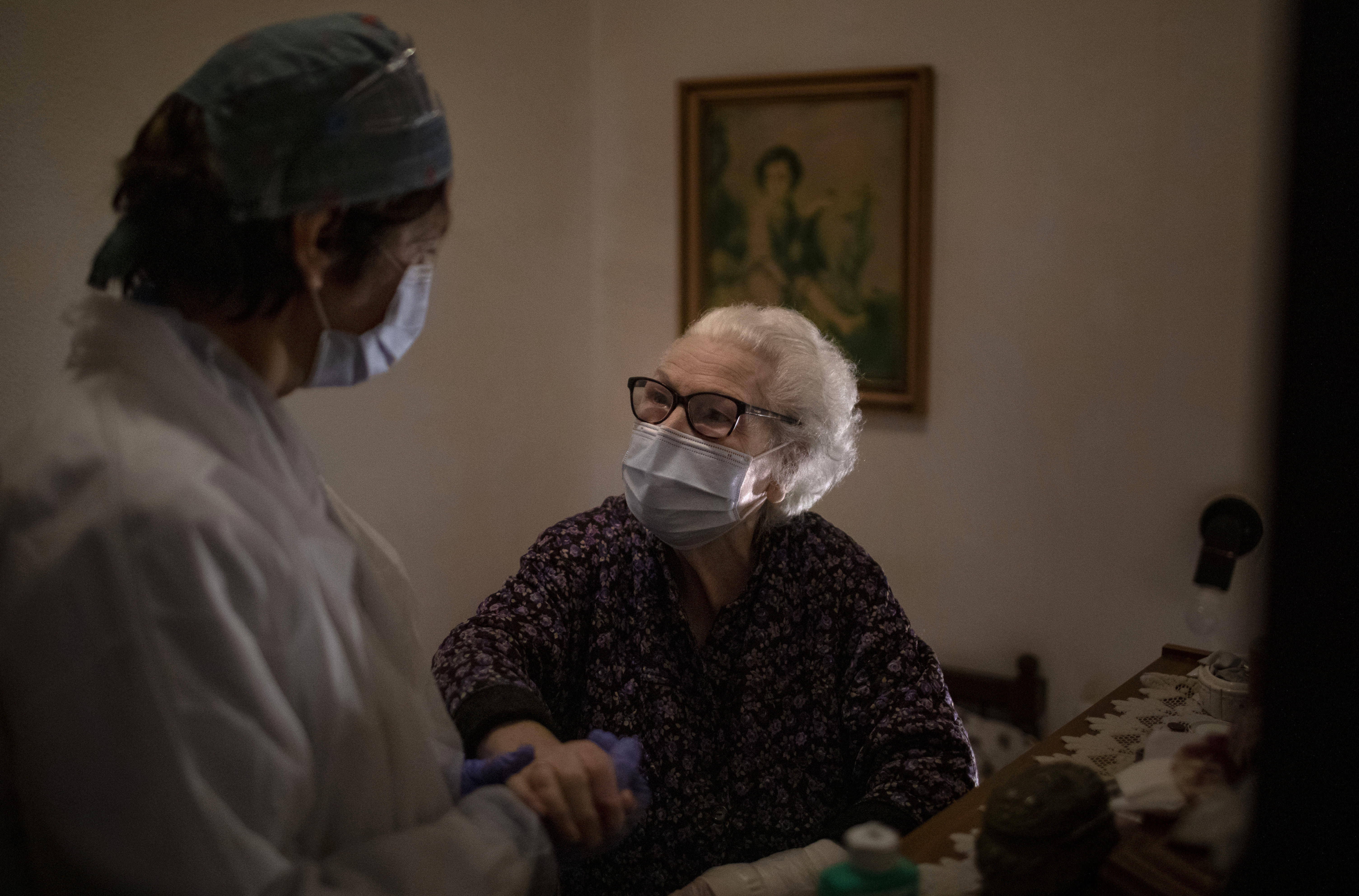 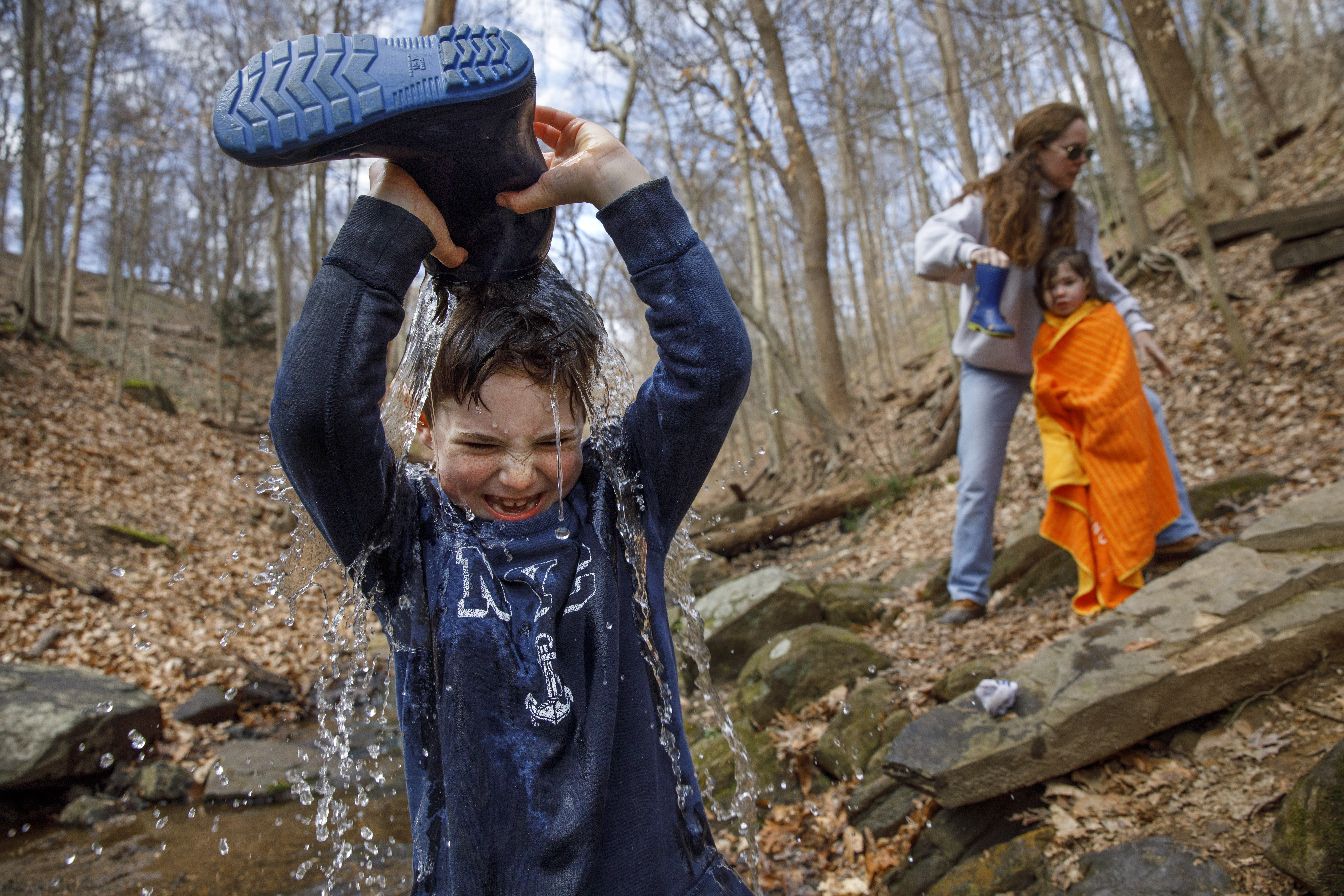 Desmond Peskowitz, 7, of Takoma Park, Md., pours a stream of water on his head from his boot, March 17, 2020, as he plays a game he called "champagne fight," inspired by Formula 1 Racing, with his mother Kathleen Caulfield, and sister Erin Peskowitz, 4, in Rock Creek Park in Washington. Desmond's school is closed due to coronavirus precautions, and his mother said the park was their "PE class" today. "I don't worry as much about germs when they're outside," says Caulfield, "the touching seems to be less when kids play outdoors." (AP Photo/Jacquelyn Martin) 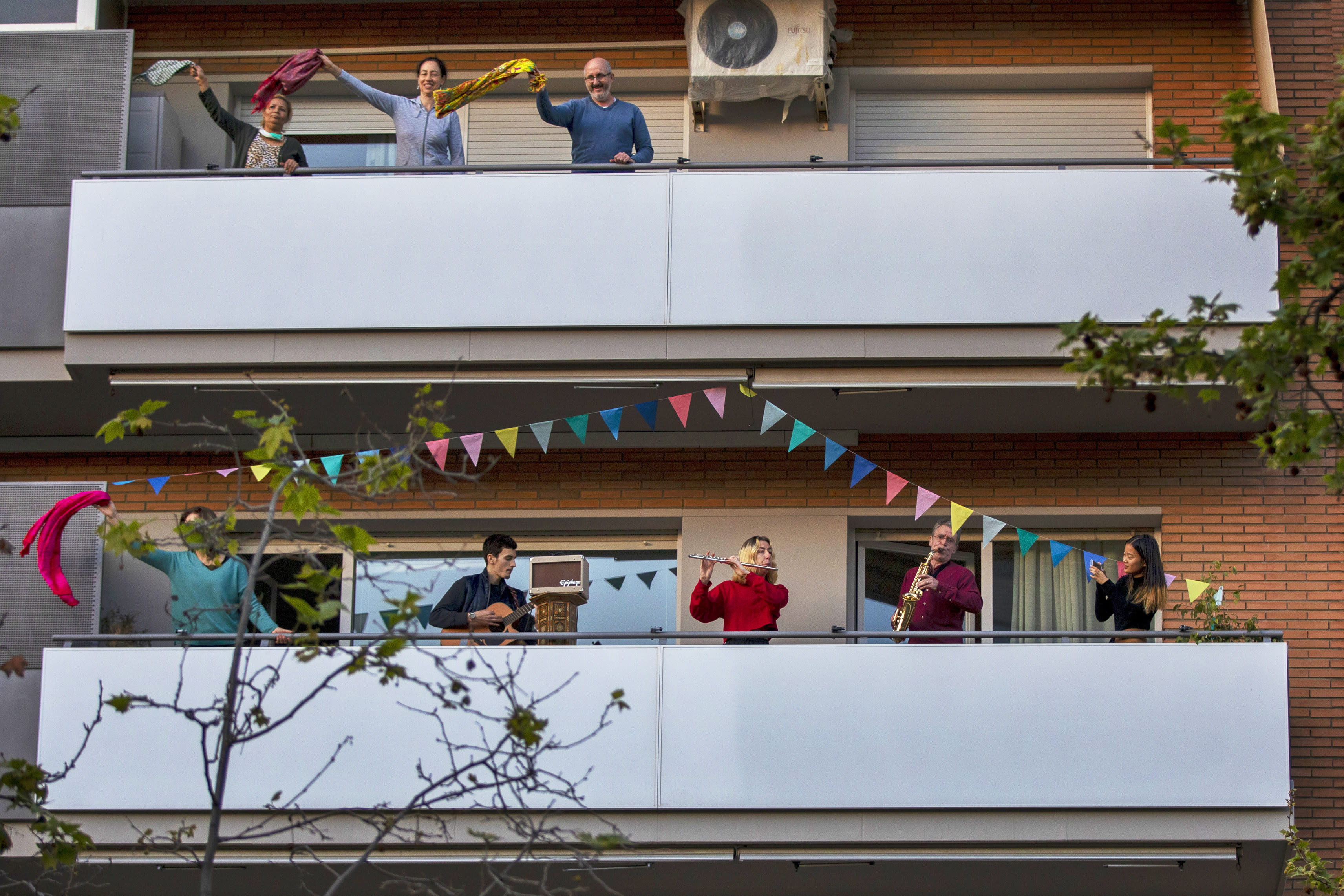 People play instruments as others dance on their balconies in support of the medical staff that are working on the COVID-19 virus outbreak in Barcelona, Spain, April 5, 2020. (AP Photo/Emilio Morenatti, File)