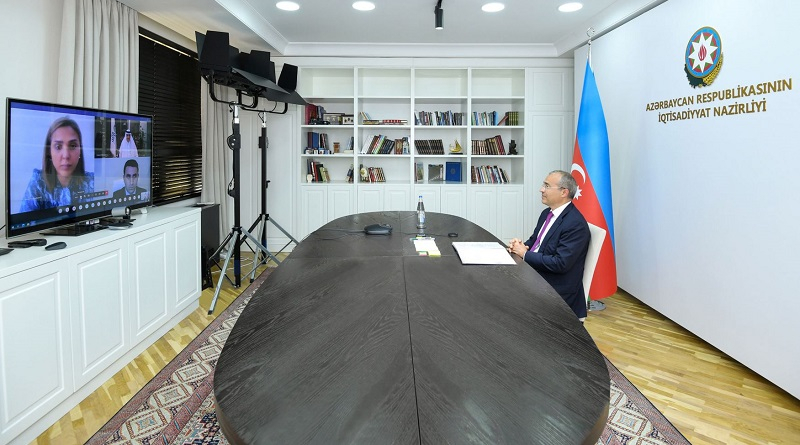 The investments of the Islamic Development Bank (IDB) in the Azerbaijani economy within 18 projects reached about $1 billion, the country’s Minister of Economy Mikayil Jabbarov said.

Jabbarov made the remarks at a meeting with President of the IDB Group Bandar Hajjar.

“Azerbaijan highly appreciates the bank's support in the development of the country's private sector,” the minister said.

“The implementation of 17 projects covering agriculture, social sphere and water supply has already been completed, another project is being implemented,” Jabbarov added.

He also stressed Azerbaijan's interest in expanding ties with the IDB, the possibility of cooperation with the bank in the field of restoration of the territories liberated from the Armenian occupation.

Jabbarov emphasized the importance of implementing the "smart village" and "smart city" concepts on liberated lands, support of the projects related to the construction of a network of sustainable infrastructure.

The information on the priorities of Azerbaijan’s social and economic development was given during the meeting.

The possibility of cooperation among the bank, the Azerbaijani Agency for Development of Small and Medium Businesses and Azerbaijan Investment Company OJSC, as well as on expanding the IDB's participation in the projects aimed at the development of Azerbaijan and the region by using the technologies of the digital economy and the Fourth Industrial Revolution were stressed at the meeting.

In turn, the president of the IDB group said that the bank's support being rendered to Azerbaijan in carrying out economic reforms, and informed about the possibilities to expand bilateral ties.

Hajjar also stressed that the IDB will continue to actively participate in the projects being implemented in Azerbaijan.