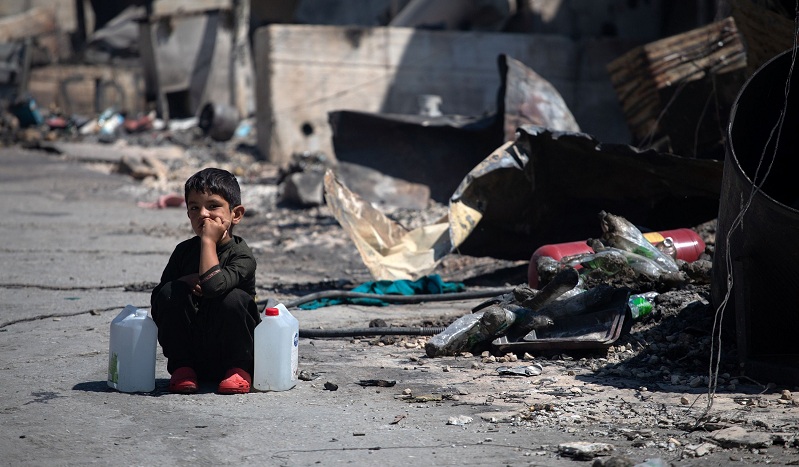 A huge fire has almost completely destroyed Europe's largest migrant camp on the Greek island of Lesbos, revealing how desperate the situation in Greece’s refugee camps is. Thousands of refugees are already living in fear of a COVID-19 outbreak, which would be devastating in such overcrowded conditions, and now their accommodation has been made even more precarious by the devastating fire. It is not clear where people should be housed as the fire has left thousands homeless.

Over 12,000 men, women, and children ran in panic out of containers and tents into nearby olive groves and fields as the fire destroyed most of the overcrowded, squalid camp.

The blaze started just hours after the migration ministry said that 35 people had tested positive at the camp. Some migrants wanted to leave the camp as infections increased, while others who had been infected and their contact persons had refused to be put in isolation, Athens-Macedonian News Agency (ANA-MPA) reported.

Videos on social media painted a picture of devastation, with people seen wandering around the camp looking frightened, while others sang "Bye Bye, Moria!" Greek media reported that many residents had fled the burning camp to nearby forests and hills, while others set off toward the island's main town of Mytilene.

The Moria camp, which was built to hold fewer than 2,800 people, has been routinely criticized by rights groups and the United Nations High Commissioner for Refugees (UNHCR) for its lack of sanitation and overcrowding. Since becoming one of the main gateways into Europe for migrants and asylum-seekers in 2015, Greece has built dozens of detention centers where overcrowding is common. The government, helped with European Union funding, has for months been attempting to build a new camp on Lesbos to replace Moria. But locals have resisted the move, clashing with riot police earlier this year to prevent construction from going ahead.

The devastating fire and the humanitarian disaster in Moria also dialed up the pressure on European countries over how to respond to the yearslong migrant crisis. Since taking in more than a million people fleeing war and poverty in 2015, Europe has stepped up border controls but still falls short on common migration and asylum policies. Many European countries have tried to keep millions of refugees and migrants out of their borders, while Greek authorities have continued to block refugees from reaching Europe. German Foreign Minister Heiko Maas called on EU countries to support Greece following a devastating fire at the Moria refugee camp by taking in migrants. "What happened in Moria is a humanitarian disaster," Maas wrote on Twitter. "Together with the European Commission and other EU member states who are willing to help, we must decide as quickly as possible how we can support Greece," he added. "This includes distributing refugees among willing states in the EU," said Maas, whose country currently holds the bloc's rotating presidency.

EU Home Affairs Commissioner Ylva Johansson said her thoughts and sympathies were with the people of Lesbos, especially with migrants and staff based at the Moria camp. The EU's senior migration official tweeted that she was in contact with Greek authorities and had offered to finance the transfer and accommodation of 400 unaccompanied children and teenagers who remained at the camp to the Greek mainland.

Norway's government has announced that the country will take in 50 people from the camp. "We have activated the process," Prime Minister Erna Solberg said, adding that the focus would be on families with children.

EU Oxfam spokesperson Florian Oel told German news agency (DPA) that, "This tragedy could have been prevented if Greece and all other EU governments would not have turned their backs on people seeking safety in Europe." "The announced transfer of all unaccompanied children in Moria to the Greek mainland is the first important step. EU governments must now support Greece in moving all people seeking asylum from all island refugee camps (to) the mainland as well as to other safe places across Europe," he added.