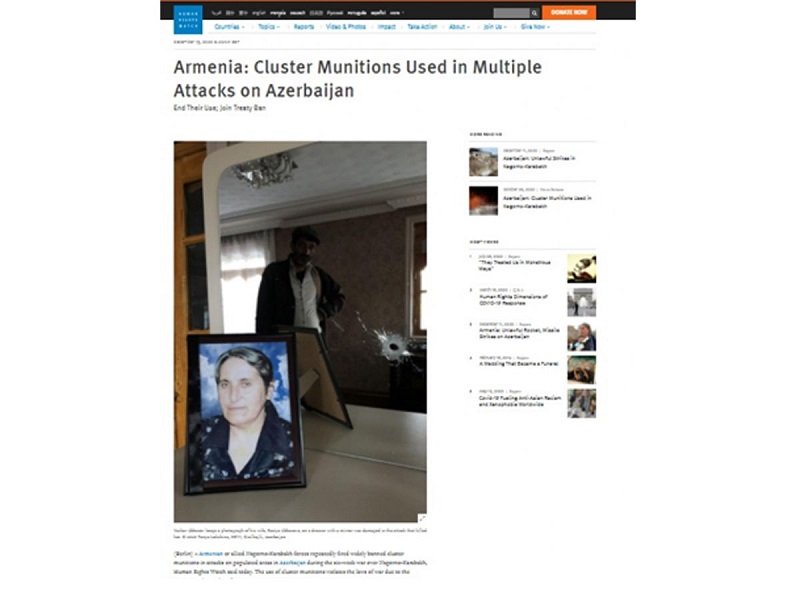 Human Rights Watch has disseminated another report on investigations, conducted due to a missile attack by Armenian Armed Forces against civilians and civilian facilities of Azerbaijan, Trend reports.

The report reads that the Armenian Armed Forces and the fictitious regime of Nagorno-Karabakh during the six-week war repeatedly fired at the settlements of Azerbaijan with prohibited weapons.

The use of prohibited weapons is a violation of military laws, the report emphasized.

Hugh Williamson, Director of Human Rights Watch for Europe and Central Asia, noted that the use of cluster weapons is prohibited by international agreement, especially their use against civilians.

The report provides information on the features of cluster weapons: they can be fired by guns, missiles, and mortars both from the ground and from the air.

“Usually, cluster shells explode in the air, and the bombs are scattered over a large area. During the attack, everyone is at risk of death or injury. Moreover, cluster bombs may not detonate immediately and pose a mine threat,” reads the report.

“A cluster munition attack on the city of Barda in October resulting in the killing of 21 people and injuring 70 civilians has been documented. During a visit to Azerbaijan in the first half of November, Human Rights Watch documented four cluster bomb attacks by the Armenian Armed Forces: one - in Barda city, two in Goranboy and one - in Tartar,” the report said.

“On November 27, representatives of the organization met in Yerevan with a representative of the Armenian Foreign Ministry, who denied the presence of cluster munitions in the arsenal of the Armenian Armed Forces. A number of international publications, including the annual report of the Military Balance 2020 catalog of the International Institute for Strategic Studies, said that Armenia has Tochka-U and Iskandar, Smerch and WM-80 ballistic missiles (made in China), that can drop cluster bombs. Human Rights Watch understands that illegal groups in Nagorno-Karabakh themselves had nowhere to take cluster munitions from. Then it is assumed that these attacks were carried out by the Armed Forces of Armenia, or it provided the military illegal forces in Nagorno-Karabakh with this ammunition. Cluster munitions, as a prohibited weapon, should never be used or supplied by anyone,” said the report.

The report also reflects the opinions and interviews of Azerbaijani civilians who were attacked by cluster weapons.