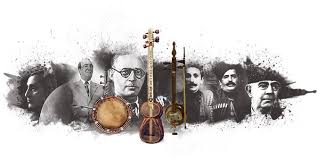 The film tells about the inclusion of Azerbaijani Mugham into Golden Records that was selected to portray the diversity of life and culture on Earth.

“In 1977, NASA launched two identical Voyager spacecrafts to study planetary systems. In order to portray the diversity of life and culture on Earth, Golden Records were attached to both spacecrafts. The contents of the records were selected by a committee chaired by Dr. Carl Sagan of Cornell University. After reviewing thousands of songs from around the world, NASA Committee selected just 27 songs representing the Earth’s musical heritage and cultural achievements. Alongside the music of Bach, Mozart and Beethoven, Azerbaijani Mugham music was also included in this exclusive collection.”

The film also refers to the remarks by Creative Director of Golden Records Ann Druyan. “Azerbaijani Mugham’s subtlety has enchanted me for years. I consider it a masterpiece of musical articulation.”

Azerbaijan’s Karabakh region is particularly known for Mugham. In 2008, UNESCO added Azerbaijani Mugham to its List of Intangible Cultural Heritage of Humanity.