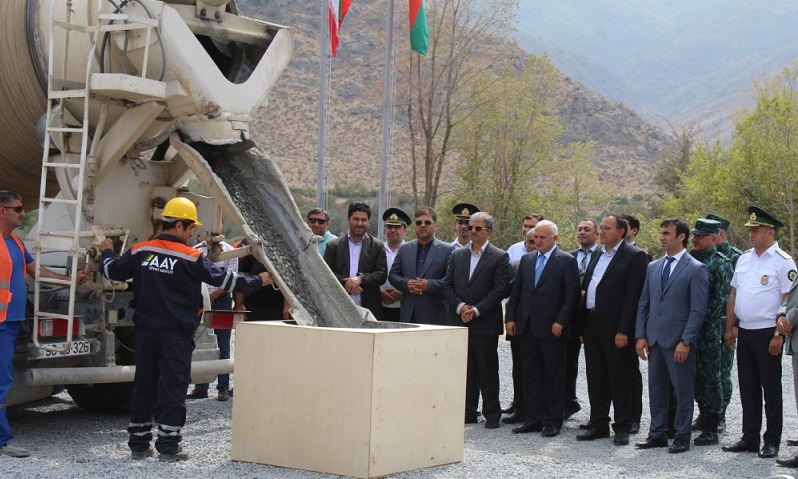 Azerbaijan's Deputy Prime Minister Shahin Mustafayev, and Iran's Minister of Roads and Urban Development Rostam Ghasemi joined in an online format the ceremony of laying the foundation to the Aghband highway bridge, which will be built at the state border with Iran in the territory of the Eastern Zangazur economic region, on 21 September.

The project will create additional opportunities for the countries of the region by serving to increase the potential of the East-West Transport Corridor and expand transport and economic ties in the region, News.Az reports.

It was recalled during the foundation-laying ceremony that the relations between Azerbaijan and Iran are on a high level and cooperation between the two countries in political, economic, cultural and other areas develops dynamically thanks to the efforts of the President of Azerbaijan, Ilham Aliyev, and the President of Iran, Ebrahim Raisi. It was noted that cooperation between Azerbaijan and Iran in the field of transport is also rapidly developing on the basis of big potential.

It was stated that large-scale reconstruction and restoration work had been underway in Karabakh and the Eastern Zangazur economic region following Azerbaijan’s victory in the 44-day Patriotic War. As part of these works, the Horadiz-Aghband highway project has been implemented by 59%, while the Horadiz-Aghband railway project has been implemented by 38%.

This initiative by the leaders of the two countries serves to establish an important international corridor for transmission of electrical energy besides the opening of a new transport corridor.

It was also noted that the bridge over the Araz river, which will unite the 112 km-long Horadiz-Jabrayil-Zangilan-Aghband highway with the highway network of the Islamic Republic of Iran, is designed to be 216 meters long and 24,5 meters wide. The bridge is expected to have two lanes for vehicles in each direction and a pedestrian crossing. It is also planned to build a state border check point having a capacity of receiving at least 1000 trucks (export, import and transit goods) with 500 entries and 500 exits a day in the territories of both countries.

The two sides expressed confidence at the foundation-laying ceremony that the new bridge will help strengthen the relations of friendship between the two countries, further expand transport ties and contribute to the increase in the transit potential of the region.