Grandfather-ghost or the roots of glorification of fascism 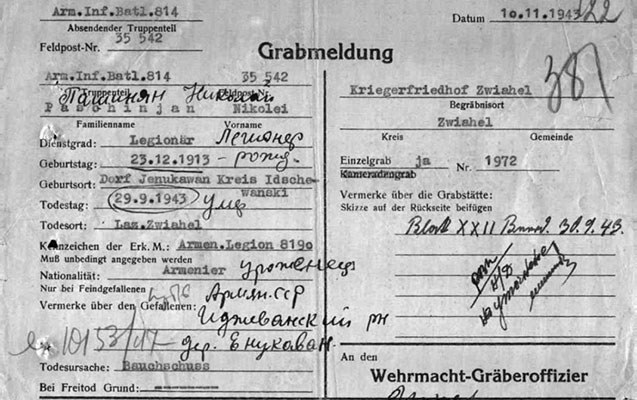 On the eve of the 75th anniversary of the Victory Day, Armenian Prime Minister Nikol Pashinyan shared a photo of his grandfather on social media, but it turned out that he collaborated with the Nazis and joined the SS legion led by Garegin Nzhdeh. This legion was fighting for Nazi Germany. At the same time, it becomes clear why the new Armenian leadership does not want to take the statue of Garegin Nzhdeh, who was associated with the Nazis, from the center of Yerevan. He did not want to demolish the monument of his grandfather's leader. According to the Russian website info24.ru, the Armenian Foreign Ministry has released information about Pashinyan's grandfather. According to the ministry, two people from the village of Yenekovan - Nikol Vartanovich Pashinyan, who is accused of collaborating with the Nazis, and the grandfather of the Armenian Prime Minister Nikol Arakelovich Pashinyan - went to the front. "His name can also be found in the database of the Russian Defense Ministry with the rank of sergeant of the Red Army," the Armenian Foreign Ministry said in a statement. On the contrary, Memorial contains information about only one Pashinyan - Nikol Vartanovich Pashinyan, who collaborated with the Nazis.

The search for Nikol Arakelovich Pashinyan did not yield any results. A search for the words of a fictitious ghost or fake grandfather - Nikol Arakelovich Pashinyan - reveals a page with this information on the website "People's Memory". However, Google's cache memory shows that the page containing "official" information about the alleged grandfather of the Armenian Prime Minister was deleted on May 26.

A search conducted on the "People's Memory" website also did not reveal any information about Nikol Arakelovich Pashinyan. The memorized page may be in the process of confirming official information about Pashinyan's grandfather, but the page "could not survive" for a long time, and the moderators deleted it while checking the accuracy of the information.

This is the conclusion. A new ghost was invented to cover up the actions of Pashinyan's grandfather, who collaborated with the Nazis, and an attempt was made to enter information about him, but the information was deleted by the moderators because it did not justify itself. If the information about Arakelovich had been available on the site before, his name would have been included in the search, and at least it would have been presented as an alternative. However, the attempt to justify him did not succeed this time, and it turned out to be misinformation. In any case, the Armenian side must not forget that we live in the Internet age and everyone has these opportunities. Otherwise, very ridiculous results occur. In fact, after this grandfather's case, the roots of Nikol Pashinyan's sympathy for the Nazis also appear. The glorification of fascism means the ideal adoption of the absurd values of fascism.

On the eve of Victory Day, Armenian Prime Minister Nikol Pashinyan shared a photo of his grandfather Nikol Pashinyan on social media. The Memorial database, created on the initiative of the Russian Defense Ministry with information about the victims of the Great Patriotic War, contains data about Nikol Vartanovich Pashinyan. According to the database, Pashinyan’s grandfather was captured, “collaborated with the enemy” and died in the Zvyagel region of western Ukraine, the now Novograd-Volinsky.