Giant iceberg almost as big as London breaks off Antarctica 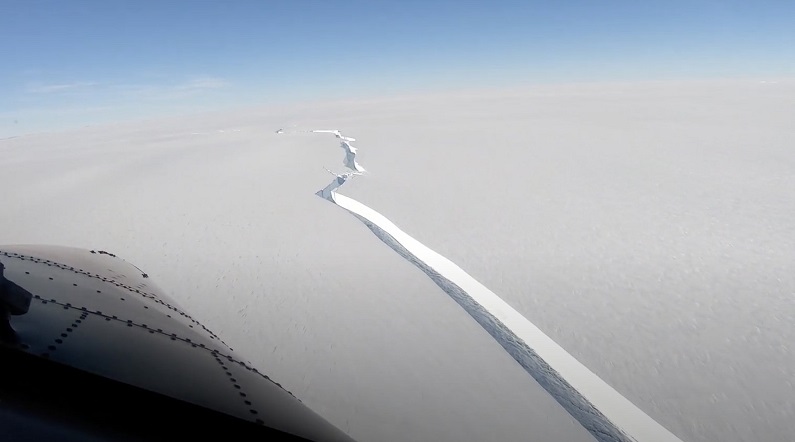 Avast iceberg almost the size of greater London has broken away from the Antarctic ice shelf near a U.K. research station, the British Antarctic Survey (BAS) said Friday.

The research body said the iceberg, measuring 1,270 square kilometers (490 square miles), had broken off from the 150-meter-thick Brunt Ice Shelf in a process called "calving."

This came almost a decade after scientists first saw massive cracks had formed in the shelf.

A crack in the ice widened by several hundred meters on Friday morning before the iceberg broke off completely.

"Our teams at BAS have been prepared for the calving of an iceberg from Brunt Ice Shelf for years," said BAS director Jane Francis.

The mobile research base relocated inland for safety reasons in 2016-2017 as cracks in the ice threatened to cut it off.

"That was a wise decision," commented Simon Garrod, BAS director of operations.

The glaciologists said the latest event is unlikely to affect the station's current location.

The base's 12-person team left earlier this month, as they leave the base uninhabited in winter due to the unpredictable conditions.

While they are away, data from GPS instruments at the site go to a center in Cambridge, eastern England, for analysis.

Icebergs naturally break off from Antarctica into the ocean in a process accelerated by climate change.

The BAS said in this case, there is "no evidence that climate change has played a significant role"

"Over coming weeks or months, the iceberg may move away; or it could run aground and remain close to Brunt Ice Shelf," said Francis.

The British Antarctic Survey is a world leader in environmental research in the region.

The loss of billions of tons of ice from Earth's frozen spaces is likely to increase global temperatures by an additional 0.4 degrees Celsius, according to another study highlighting the danger of a "vicious circle" of warming.

Arctic summer sea ice levels have declined by more than 10% each decade since the late 1970s and mountain glaciers have shed roughly 250 billion tons of ice annually over the last century. Ice loss from the West Antarctic and Greenland ice sheets is accelerating and already outstripping what scientists until recently believed to be the worst-case melt scenarios.

Decades of studies have sought to quantify how Earth's melting ice will contribute to rising sea levels – Antarctica and Greenland alone contain enough frozen water to boost oceans' height by around 60 meters (almost 200 feet) but little research has tried to predict how ice loss will add to the already 1 degree Celsius of global warming emissions from fossil fuels since the start of the industrial era.

A study published last year showed that in 2019, Greenland's ice sheet shrank by more than at any time since record-taking began in 1948.