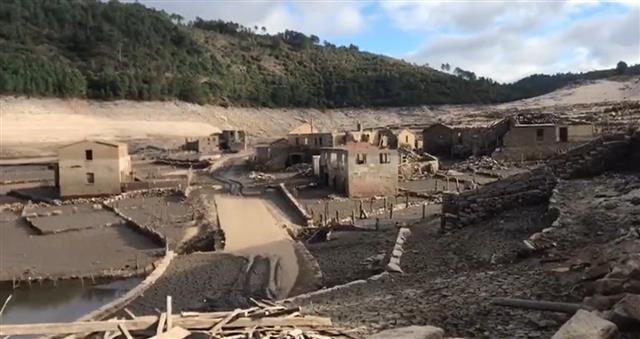 A ghost village that has emerged as drought has nearly emptied a dam on the Spanish-Portuguese border is drawing crowds of tourists with its eerie, grey ruins, News.Az reports citing Reuters.

With the reservoir at 15% of its capacity, details of a life frozen in 1992, when the Aceredo village in Spain's northwestern Galicia region was flooded to create the Alto Lindoso reservoir, are being revealed once more.

"It's as if I'm watching a movie. I have a feeling of sadness," said 65-year-old pensioner Maximino Perez Romero, from A Coruna. "My feeling is that this is what will happen over the years due to drought and all that, with climate change."

Walking on the muddy ground cracked by the drought in some spots, visitors found partially collapsed roofs, bricks and wooden debris that once made up doors or beams, and even a drinking fountain with water still streaming from a rusty pipe.

Crates with empty beer bottles were stacked by what used to be a cafe, and a semi-destroyed old car was rusting away by a stone wall. Drone footage showed the derelict buildings.