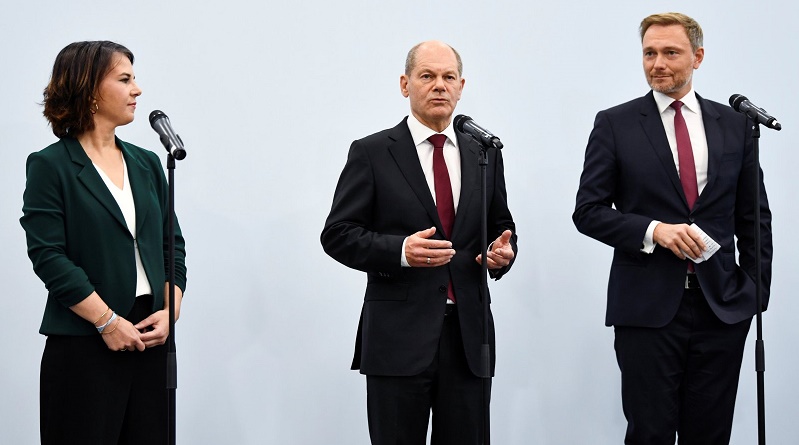 The three parties have been holding talks since Scholz's center-left SPD won the general elections on Sept. 26 with Merkel's conservatives in second place as she prepares to leave politics.

"Overall, we can sense here that a new beginning is possible, brought about by the three parties that have come together here," Scholz told reporters. "We have agreed on a text from the exploratory talks," he said, adding that this "is a very good result that clearly shows that a government that aims to ensure we achieve progress can be formed in Germany."

Greens co-leader Annalena Baerbock said the initial agreement heralds a "coalition of progress" to "really use the next decade as a decade of renewal."

The agreement that will form the basis of formal coalition talks all but means that Merkel's Christian Democratic Union of Germany (CDU)-Christian Social Union (CSU) alliance is headed for the opposition benches after scoring their worst post-war election result.

CDU leader and chancellor hopeful Armin Laschet had recently said his party remains open to forming a governing coalition, but even his own job is hanging by a thread.

Facing their worst crisis in decades, the conservatives are planning a clean sweep of their leadership, with a congress by December to elect their new bosses.

Scholz, who is also Merkel's vice-chancellor, this week voiced confidence that the three-way talks involving his party will produce Germany's next government before Christmas.

A coalition of the SPD, the Greens and FDP – known as the "traffic light" after the three parties' red, green and yellow colors – has found favor with Germans, with 62% approving the constellation as the next federal government, according to a poll published Friday.

Scholz's approval rating was even higher, as three in four say it was "good" for him to become chancellor.