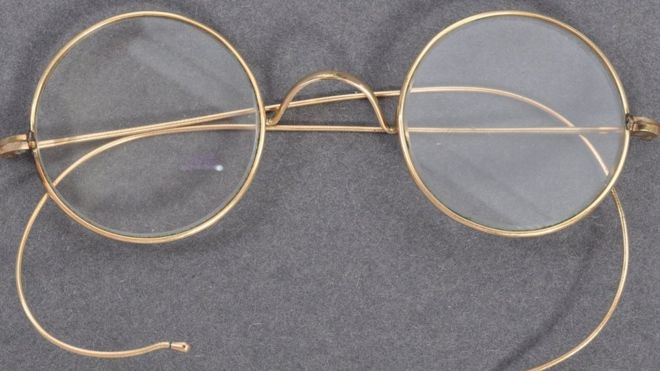 A pair of Mahatma Gandhi's glasses have sold for £260,000 after they were found sticking halfway out of an auction house's letterbox, BBC News reports.

The spectacles were bought through a phone bid from an American collector after six minutes of bidding on Friday.

Auctioneer Andrew Stowe said it was a new record for East Bristol Auctions and described it as "the star lot of the century".

Mr Stowe said the owner of the glasses was an elderly man from Mangotsfield who said he would split the money with his daughter.

They had been handed down from generation to generation in the owner's family, after a relative met Gandhi on a visit to South Africa in the 1920s.

"It's a phenomenal result. These glasses represent not only an auction record for us, but a find of international historical importance," Mr Stowe said.

The glasses had been left in a plain white envelope in a letter box at East Bristol Auctions on a Friday night and were not collected until the following Monday morning.

"They could quite easily have been stolen or fallen out or just ended up in the bin," Mr Stowe continued.

He said the owner had no idea of their value and "nearly had a heart attack" when he was told they might be worth £15,000.

"These glasses have been lying in a drawer for the best part of fifty years. The vendor literally told me to throw them away if they were 'no good'. Now he gets a life-changing sum of money."