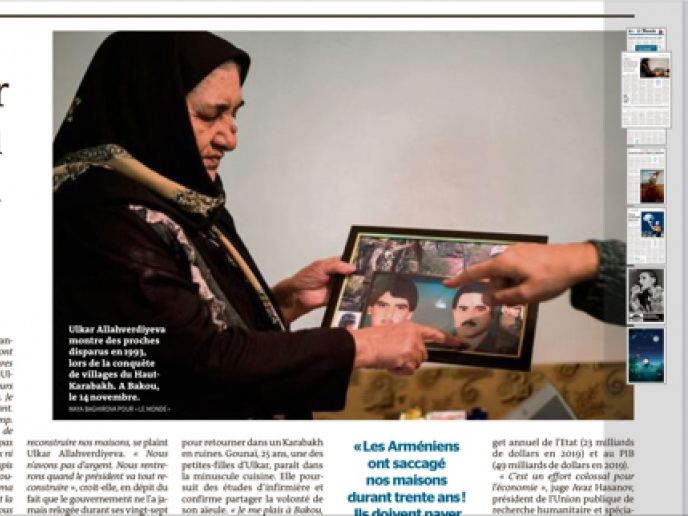 The French Le Monde newspaper published an article about 600,000 Azerbaijani refugees who dream of returning to their native lands, Trend reports.

The report says that the vast majority of these displaced persons were forced to flee urgently in 1993 when Armenian troops captured the cities and villages of Azerbaijan.

At the same time, the words of an Azerbaijani citizen are quoted, who speaks about the atrocities of the Armenian people in the Azerbaijani lands: "The Armenians arrived in our village on August 13 at about 6 pm (GMT+4). Their tanks were shooting at our homes. I was trembling with fear, it was very scary. We had to run immediately. We only managed to get in the car, without having time to take any jewelry or passport. But I took the carpet you see on the floor now. I remember locking the door of my house, that's all. While fleeing, our car stalled and we had to walk for three days, " remembered 78 old Ulkar Allahverdieva.

The newspaper also mentions that the territories of Azerbaijan liberated from occupation, which has been devastated and abandoned for 26 years, require investment and huge efforts to clear mines.

"Karabakh is synonymous with the return. Azerbaijan has been living in tension for the past 26 years. The restoration of these territories is both a state religion and a sincere impulse. At least 600,000 Azerbaijanis were expelled from Karabakh in the early 1990s during ethnic cleansing," the newspaper says.