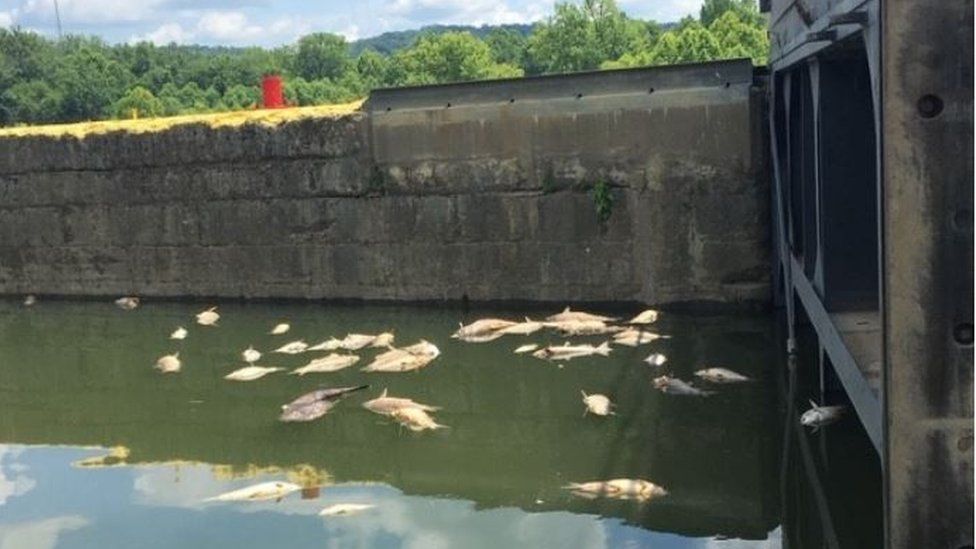 The head of a French fishing federation has lodged a complaint against global food conglomerate Nestlé, after thousands of fish were found dead in a river in north-eastern France.

Several tonnes of dead fish were reported in the Aisne river at the weekend, close to a Nestlé factory.

The deaths were due to a decrease in oxygen levels in the water, the local prefecture said on Tuesday.

Tests are being carried out to determine the origin of the pollution.

The dead fish were found near Challerange, 50km (31 miles) from Reims, the prefecture said in a statement.

"We have lodged a complaint against Nestlé France for pollution and violation of article 432.2 of the environmental code," said Michel Adam, president of the Ardennes Fishing Federation.

The damage amounts to "several thousand euros", he added. "Everything died in an area seven kilometers (4.3 miles) long and 30 meters wide."

"We have already recovered three tonnes of dead fish. But there are still some left. Some 14 species have been affected, including protected species such as eels and lamprey.

"I have been with the federation for 40 years, I have never seen pollution of this magnitude," he added.

The Nestlé factory in Challerange, which manufactures powdered milk, confirmed in a statement that there had been an "occasional and involuntary overflow of biological sludge effluent, without the presence of chemicals" from its wastewater treatment plant on Sunday evening.

"As soon as we learned of the report on Sunday at 23:00 (21:00 GMT), we immediately stopped production and put an end to the spill," factory director Tony do Rio said in a statement quoted by the Franceinfo website on Wednesday.

"This spill was a one-off [and lasted] less than three hours on Sunday evening," he said, adding that activity at the factory had been stopped for a few days.

Since the discovery of the dead fish, volunteer fishermen and firefighters have been working to clean up the river. A dam had also been installed to contain the spread of pollution, the prefecture said.