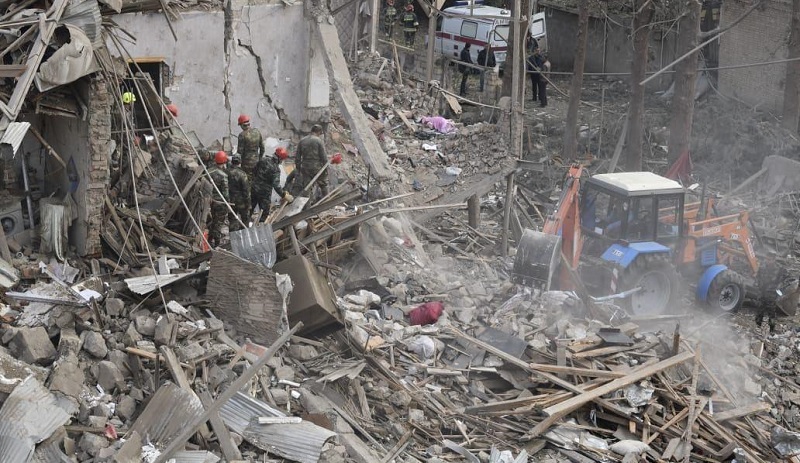 France 24 TV channel (France) aired a report highlighting the recent missile attack on the Azerbaijani city of Ganja by the Armenian Armed Forces.

The report presented footage of buildings destroyed and people who lost their family members as a result of the attack.

During the report, the journalist of the France 24 channel spoke with the people who survived under the rubble and brought to the attention of the audience that the missile had been fired on residential buildings at night.

"Every time when bodies of the killed people are pulled out from under the rubble, we clearly see how people were killed from this shelling," the report said. “According to the Azerbaijani side, the missile was fired from the territory of Armenian Vardenis province.”

"We see that the Armenian side deliberately violates the negotiation process, as well as the humanitarian ceasefire, and we also see heavy destructions here. The missile strike was made from the territory of Armenia. What can we talk about after these destructions?!" Hajiyev said.

The channel’s camera crew visited a family, the children of which were wounded from the missile strike. It was reported that the local residents expect a severe condemning of this terrorist attack by the international community.

On October 11, 2020, at about 2:00 (GMT+4) Armenian Armed Forces fired missiles at multi-apartment residential buildings in the central part of Ganja, the second largest city of Azerbaijan, located outside the frontline zone. As a result, 10 civilians were killed, 35 injured, as well as more than 10 multi-storey buildings and over 100 different objects were damaged.