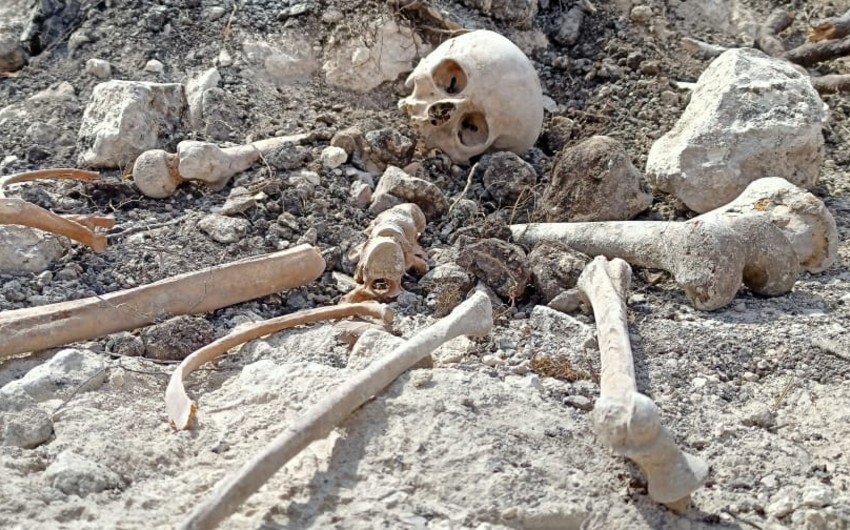 The forensic examination of the remains found at the Farrukh height in Azerbaijan’s Khojaly district has proved their belonging to Azerbaijanis, News.Az reports citing the State Commission for the Affairs of Prisoners of War, Hostages and Missing Citizens.

The examination of the human remains discovered in late March at the Farrukh height found out that they belong to the Caspian subtype of the Caucasoid race, to which, according to anthropological features, the Azerbaijani Turks belong, was established.

“The remains were buried randomly. Moreover, the finding of traces of violence and blunt force marks on the remains, as well as numerous shell casings, proves that the remains belong to Azerbaijani citizens who died during the first Karabakh war [in the 1990s],” the commission said. “The fact that the burial is located at a distance of 10-15 kilometers from settlements and in a high mountainous area also gives reason to conclude that this place isn't a traditional cemetery.”

“It isn’t a coincidence that the Armenian "anthropologist" Levon Yepiskoposyan, whose name is unknown to the scientific community, mentions Khojaly city in a video spread by Armenians. In an interview, the "anthropologist" claimed that these remains allegedly belong to Armenians who died in Khojaly in 1992-1993 and were buried 12 kilometers from the city,” it added.

The commission emphasized the absence of Armenian religious monuments and an Armenian cemetery in the territory where the burial was found.

“The propaganda launched by the Armenian side, which is seriously concerned about the discovery of a mass grave at the Farrukh height, is aimed at hiding the facts of violations of international humanitarian law by Armenia, committing crimes against humanity during the first Karabakh war and misleading the international community.

“Relevant measures are being taken to identify the remains of the bodies found in the liberated territories, and further details will be published later,” the commission concluded.