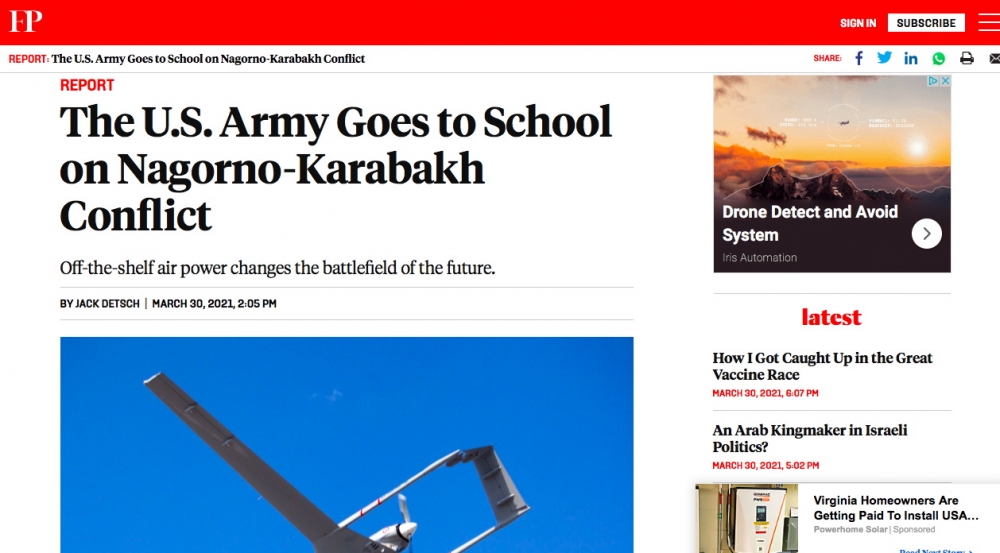 Headlined “The U.S. Army goes to school on Nagorno-Karabakh conflict”, the article highlights the US servicemen’s studying Azerbaijani Armed Forces’ experience of conducting military operations during the Karabakh war.

“When Azerbaijan took over the skies in its fight with Armenia over the Nagorno-Karabakh last fall, winning the air war with commercial Turkish and kamikaze drones, one thing started to become clear to U.S. Army strategists: It’s becoming easier to hunt and kill troops than ever before—and to do so on the cheap.”

“During the six-week conflict, Azerbaijan deployed Turkish Bayraktar TB2 drones and loitering munitions, many of them Israeli-made, to shrink the battlefield and chip away at Armenia’s armored forces as well as the logistical tail that hadn’t even reached the front lines,” the author says.

“In the waning days of the conflict, Azerbaijani President Ilham Aliyev even touted a laundry list of Armenian equipment purportedly destroyed or captured, including nearly 250 tanks, 50 infantry fighting vehicles, and four S-300 missile defense systems, as well as 198 trucks and 17 self-propelled artillery units. In mid-October, President Ilham Aliyev credited Turkish drones with helping his military to destroy more than $1 billion worth of Armenian equipment,” the article says.