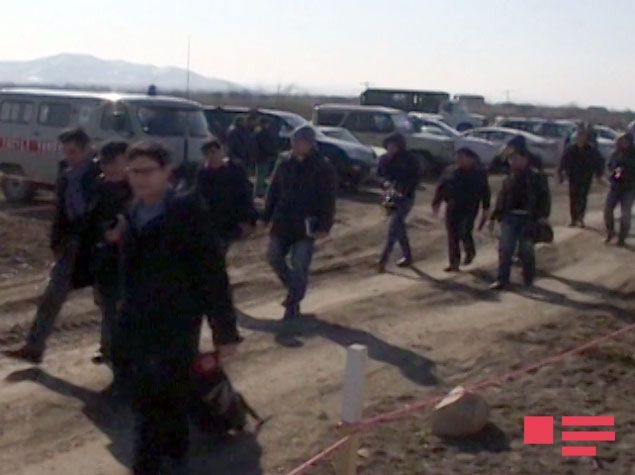 The representatives of foreign media outlets viewed the demining and construction work underway in the village, the Azerbaijani Foreign Ministry told APA.

They were given detailed information by representatives of the State Committee for Affairs of Refugees and IDPs, the Ministry of Foreign Affairs, the Azerbaijan National Agency for Mine Action (ANAMA) and local executive authorities. Armenia’s looting of Jojug Marjanli was witnessed by the foreign reporters.

Adil Aslanov, an ANAMA associate, said that in the first stage an area of 10ha is being cleared of mines in Jojug Marjanli, which covers an area of 250ha.

“The area that is being cleared right now is where 50 new private houses will be built. Of the 10ha of the area, an area of 30,000 square meters has so far been cleared,” Aslanov said, adding. “However, no unexploded ordinances have been found up to this moment, and the possibility still remains of internationally prohibited ammunition being under the rubble of the demolished houses.”

Villager Atakishiyev Atakishi said that he has returned his native land for the first time since the village was occupied by Armenians.

“I had a two-storey house. There were outbuildings and fruit trees in the yard. No trace of the house is left. Now I find it difficult to border my yard. As soon as my house is built, I will return to the native village with my family,” he added.

The foreign journalists also visited the house of the Haziyevs who have been living in the Jojug Marjanli village for more than 20 years. They talked at the tea table. They also met with the families who will return to the village after reconstruction work is over.

On 24 January 2017, President Ilham Aliyev signed an order on measures to restore the Jabrayil District’s Jojug Marjanli village, liberated from the Armenian occupation.

The Nagorno-Karabakh conflict entered its modern phase when the Armenian SRR made territorial claims against the Azerbaijani SSR in 1988.

A fierce war broke out between Azerbaijan and Armenia over the Nagorno-Karabakh region of Azerbaijan. As a result of the war, Armenian armed forces occupied some 20 percent of Azerbaijani territory which includes Nagorno-Karabakh and seven adjacent districts (Lachin, Kalbajar, Aghdam, Fuzuli, Jabrayil, Gubadli and Zangilan), and over a million Azerbaijanis became refugees and internally displaced people.

The military operations finally came to an end when Azerbaijan and Armenia signed a ceasefire agreement in Bishkek in 1994.

Dealing with the settlement of the Nagorno-Karabakh conflict is the OSCE Minsk Group, which was created after the meeting of the CSCE (OSCE after the Budapest summit held in Dec.1994) Ministerial Council in Helsinki on 24 March 1992. The Group’s members include Azerbaijan, Armenia, Russia, the United States, France, Italy, Germany, Turkey, Belarus, Finland and Sweden.

Besides, the OSCE Minsk Group has a co-chairmanship institution, comprised of Russian, the US and French co-chairs, which began operating in 1996.

Resolutions 822, 853, 874 and 884 of the UN Security Council, which were passed in short intervals in 1993, and other resolutions adopted by the UN General Assembly, PACE, OSCE, OIC, and other organizations require Armenia to unconditionally withdraw its troops from Nagorno-Karabakh.