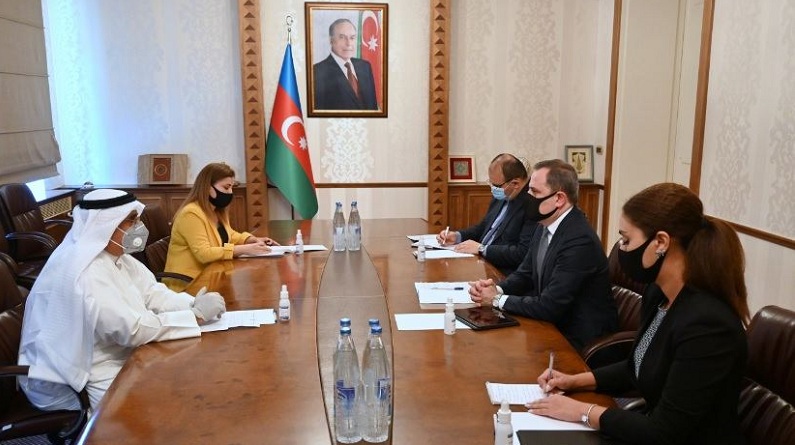 Azerbaijani Foreign Minister Jeyhun Bayramov received Ambassador of the State of Kuwait to the Republic of Azerbaijan Saud Abdulaziz Al Roomi on August 28, 2020.

Bayramov stressed the successful development of bilateral relations between Azerbaijan and Kuwait based on the principles of friendship that has deep historical roots.

The Azerbaijani foreign minister stressed that there is a wide range of opportunities for the development of cooperation in various areas.

Ambassador Saud Abdulaziz Al Roomi congratulated Bayramov on his appointment as foreign minister and in this regard conveyed sincere congratulations of Minister of Foreign Affairs of the State of Kuwait.

During the meeting, the sides exchanged views on further expansion of cooperation in bilateral and multilateral formats, as well as on the issues of mutual support within international organizations.

Briefing the Kuwaiti ambassador on the Armenia-Azerbaijani Nagorno-Karabakh conflict, which is one of the biggest threats to regional security, Bayramov emphasized the position of Azerbaijan on the settlement of the conflict based on the norms and principles of international law.

The sides stressed that Kuwait always supports the fair position of the Republic of Azerbaijan within international organizations.

During the meeting, the sides also exchanged views on other issues of mutual interest.