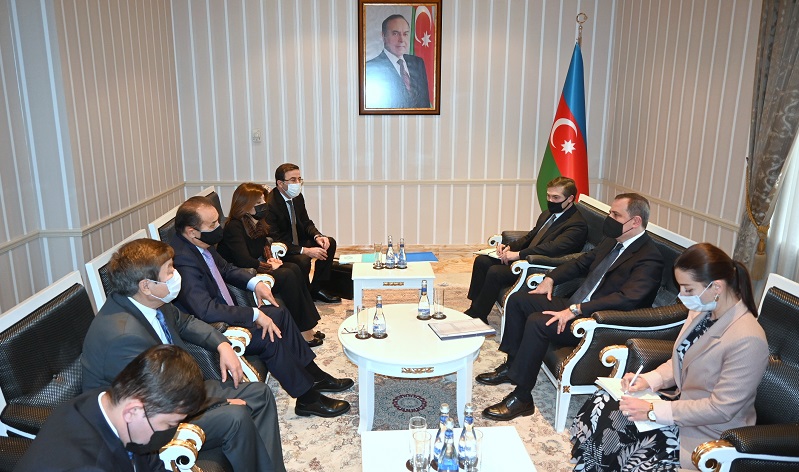 Welcoming the delegation, Minister Jeyhun Bayramov highly appreciated the visit to our country, in particular, the visit in this framework to the territories liberated from the occupation. The importance of this visit in terms of getting acquainted with the barbaric acts committed by the enemy in our territories, which have been under occupation for decades, and assessing the current situation here, including the condition of historical and cultural monuments was emphasized. The unequivocal support of Turkish cooperation organizations for Azerbaijan's position based on international law and justice was noted with satisfaction.

It was brought to the attention of the opposite side that, as a result of the 44-day Patriotic War, Azerbaijan restored its territorial integrity and ensured the implementation of UN Security Council resolutions, that with the signing of the trilateral statement of 10 November, a new reality has emerged in the region, and that Azerbaijan treats its obligations responsibly according to the signed statements.

Drawing attention to the actions of the Armenian side, contradicting the joint statement of November 10, the illegal visits to the Karabakh region of Azerbaijan, as well as terrorist acts committed by the members of the Armenian terrorist-sabotage group against the Azerbaijani servicemen and civilians in the territories liberated from the occupation were particularly noted. Since 62 members of the detained sabotage group were sent to the territory of Azerbaijan with the aim of engaging in sabotage and terrorist activities in the period after the ceasefire, it was brought to the attention of the opposite side that these persons are not considered prisoners of war in accordance with international humanitarian law and are responsible in accordance with the criminal legislation of Azerbaijan.

Speaking about the restoration and reconstruction work carried out by Azerbaijan in the liberated territories, the Minister stressed that these projects serve the future prosperity of the region.

Secretary General Baghdad Amreyev noted that during his visit to Azerbaijan they visited the liberated lands and got acquainted with the situation there, and expressed interest in involving Turkish cooperation organizations in the restoration of these territories. Expressing support for Azerbaijan's rightful position, the Secretary General noted that Azerbaijan's victory was a victory that united the entire Turkic world.

The sides exchanged views on the participation of the Turkic Council, TURKSOY, and the International Turkic Culture and Heritage Foundation in the process of restoration of the liberated territories of Azerbaijan, as well as future plans for the city of Shusha.

During the meeting, the sides also discussed prospects for future cooperation within the Turkish Council and upcoming meetings.