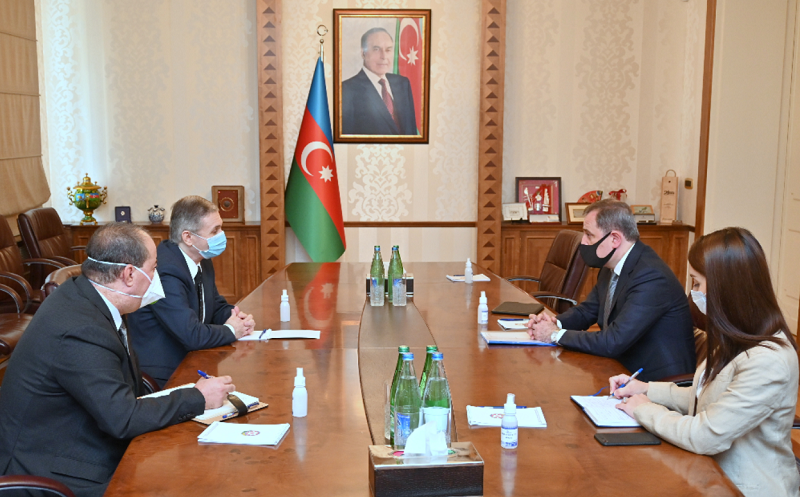 On July 27, Foreign Minister Jeyhun Bayramov received the Ambassador of the State of Palestine Nasir Abdulkarim Abdurrahman as the doyen of the diplomatic corps in Azerbaijan.

Minister Jeyhun Bayramov spoke about the friendly and cooperative relations between Azerbaijan and the State of Palestine, both bilaterally and multilaterally, and expressed confidence that this cooperation will continue to develop. It was noted that mutual visits between the two sides to date have contributed to the development of these relations. The Minister stressed the mutual support of both sides within the international framework.

Ambassador Nasir Abdulkarim Abdurrahman expressed gratitude for the warm reception and delivered the congratulations of the Palestinian Minister of Foreign Affairs to the Minister Jeyhun Bayramov and his best wishes to the Minister on ensuring Azerbaijan's national interests on the international arena.

The Ambassador noted with satisfaction that the Ministry of Foreign Affairs has always demonstrated cooperation and coordination in the activities of the diplomatic corps in Azerbaijan.

Touching upon bilateral relations, the Ambassador noted the fraternal ties between the two peoples and the historical roots of the relations between the countries.

The Ambassador underlined the firm support of Palestine to the territorial integrity of Azerbaijan and the position of his country on implementing the resolutions adopted by the UN Security Council. He also thanked Azerbaijan for the support rendered to his country.

The Ambassador Nasir Abdulkarim Abdurrahman also expressed his condolences to the families of the Azerbaijani martyrs killed as a result of the military provocation committed by the Armenian armed forces on the Azerbaijan-Armenia border on July 12.

In his turn, Minister Jeyhun Bayramov informed his interlocutor about the next pre-planned military provocation committed by the Armenian armed forces on the Azerbaijan-Armenia border and the current situation in the region. He stressed that the Armenian side has not achieved any goal with this provocation, on the contrary, it once again demonstrated its aggressive nature and faced the decisive position of the international community. Noting that the roots of the tension in the region lie with the aggressive policy of the Republic of Armenia, the Minister stressed the need to eliminate the consequences of the Armenia-Azerbaijan conflict and the negotiations on the settlement of the conflict should serve this purpose. Minister Jeyhun Bayramov stressed that Azerbaijan demands substantive and results-oriented negotiations and does not participate in the talks just for the sake of negotiations.