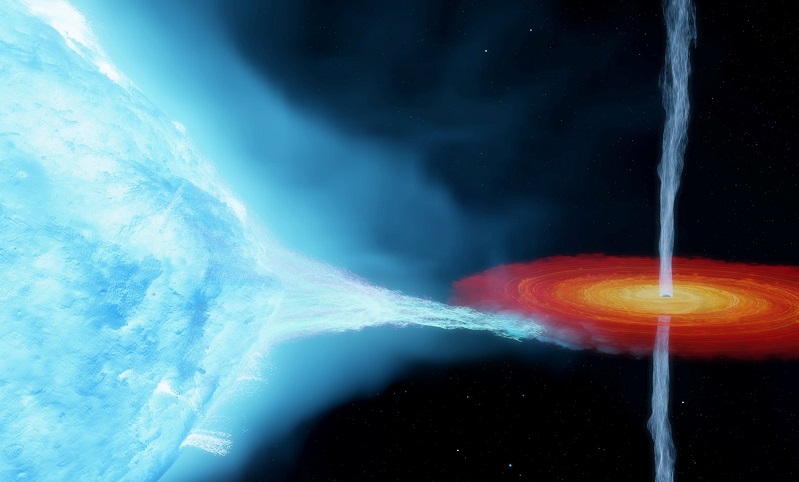 The first black hole ever to be discovered, thanks to the use of suborbital rockets in 1964, named “Cygnus X-1,” has received new updates on its surroundings and its distance to the Earth, shedding new light on the celestial mass that has played a major role in the history of our knowledge of space.

A fresh examination has revealed new details about Cygnus X-1, including that it is bigger than previously known. Researchers said Thursday that new observations of the black hole, orbiting in a stellar marriage with a large and luminous star, showed it is 21 times our Sun's mass, about 50% more massive than was previously believed.

While it is still one of the closest known black holes, they found it is somewhat farther away than what was calculated before, at 7,200 light-years away from Earth. A light-year is the distance light travels in a year which is equal to 9.5 trillion kilometers (5.9 trillion miles).

Black holes are extremely dense, with gravitational pulls so ferocious, not even light escapes. Some, called the "supermassive" black holes, are immense, like the one at our Milky Way galaxy's center which is 4 million times the Sun's mass. Smaller "stellar-mass" black holes possess the mass of a single star.

Cygnus X-1 is the Milky Way's largest-known stellar-mass black hole and among the strongest X-ray sources seen from Earth, said astronomer James Miller-Jones of Curtin University and the International Centre for Radio Astronomy Research in Australia, who led the study published in the Astrophysical Journal.

It devours material blowing from the surface of the companion star it tightly orbits, a "blue supergiant" about 40 times our Sun's mass. It started its existence 4 million to 5 million years ago as a star up to 75 times the Sun's mass and collapsed into a black hole a few tens of thousands of years ago.

The research included data from the Very Long Baseline Array radio telescope comprising of 10 U.S. observation stations, according to Reuters.

Cygnus X-1 was also the subject of a friendly wager between two of the most famous physicists of modern times, Stephen Hawking and Kip Thorne. Hawking bet that it was not a black hole, Thorne bet that it was. Hawking eventually conceded the bet, owing Thorne a year-long subscription to the Penthouse magazine.

Hawking would later describe the bet as a sort of “insurance policy,” stating in his book “A Brief History of Time” that it was so that his work wouldn't go to waste. “(My work) would all be wasted if it turned out that black holes do not exist. But in that case, I would have the consolation of winning my bet, which would win me four years of the magazine Private Eye,” Hawking wrote.

"Indeed, I did not have any wagers riding on these findings," Miller-Jones said.