Film “Parts of a Circle: History of the Karabakh Conflict” is biased and prejudiced: Pakistani expert 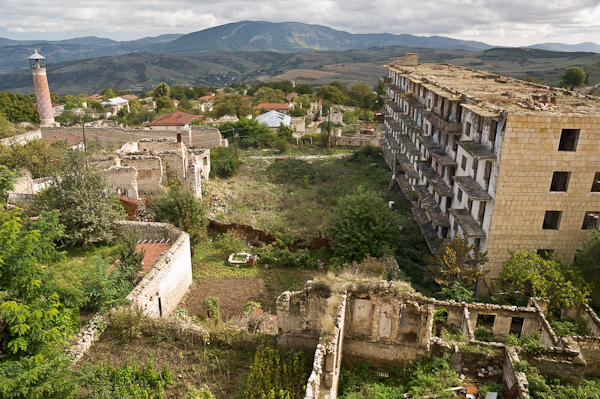 A documentary “Parts of a Circle: History of the Karabakh Conflict” is biased and prejudiced, said Dr Mehmood Ul Hassan Khan, regional geopolitical analyst, member board of experts of the Islamabad-based Center for Global and Strategic Studies (CGSS).

In his article on the documentary published by DNA News Agency, the expert noted that by distorting facts, fascist Armenia is trying to mislead the international community about its past, which is full of ethnic cleansing, genocide and state sponsored terrorism against innocent Azerbaijani civilians.

He said that the 76-minute documentary released by Conciliation Resources is another systematic attempt to distort the history and causes of the Nagorno-Karabakh conflict.

As regional expert on Azerbaijan and CIS, the author totally rejected the one-sided Armenia version of the film that is aimed at manipulating its script and contains numerous serious inaccuracies and omissions.

He also described the film as Armenia’s international project aimed at achieving the so-called “justification” of the unfolded stories of Armenians’ callousness, unkindness and prosecution towards Azerbaijanis.

The expert also noted that the documentary lacks realities and presents the conflict in an unbalanced manner.

“Narration of the causes of the conflict is not neutral either. It postulates Armenia’s propaganda mission wherein Armenia dramatized as victim not vicious villain, supporter of ethnic unity not scoundrel and proponent of progression/prosperity not partner of evil propositions which depicts height of virtual misappropriation of history full of horrendous crimes committed by Armenia, the ultimate aggressor and enemy of helpless humanity,” he said.

The author added that the film deliberately ignores the existence of notorious nationalist and expansionist greater Armenia project which was one of the most important elements of the conflict. “Even basic principles of international law mainly, respect for sovereignty, territorial integrity of states, use of peaceful means for conflict resolution, importance of diplomacy, dialogue and development are intentionally overshadowed through self-delusion of Armenians.”

He pointed out that Armenia has been aggressor and badly indulged in series of ethnic cleanings against innocent Azerbaijanis during 1905- 1918 and illegally occupied territories of Azerbaijan.

“Filmmakers seem to be biased and prejudiced in their approaches towards the exploration of the Nagorno-Karabakh conflict. They intentionally try to form equilibrium between the conflicting parties through the help of virtual reality and inject the invader’s narrative into the movie in order to justify the separation of Nagorno-Karabakh region from Azerbaijan and the occupation of the surrounding districts. Moreover, the root cause of the separation of Nagorno-Karabakh, the nationalist idea of Great Armenia, which was one the main reasons of this unforgettable human tragedy, is completely ignored in the said film.”

He added that the plight and pain of the thousands of displaced Azerbaijanis, as well as the black January tragedy and brutal massacre of helpless Azerbaijanis, was misreported in the film, which shows filmmakers’ disrespect to the memory of hundreds of ordinary Azerbaijanis who sacrificed their lives for freedom and national dignity.

The expert said the film producers also turned a blind to the importance of the relevant UN Security Council resolutions on the conflict, accusing them of attempting to form the so-called justification of the occupation of Azerbaijani territories from Armenian perspective.

“The filmmakers tried to sabotage the Khojaly genocide by Vitaly Balasanyan who was one of the main perpetrators for the mass murder of Azerbaijan civilians. It is like giving a knife to a monkey for persuasion of so called justice. It seems that producers do not have any knowledge about history which is full of self-confessions of Armenians terrorists, separatists, smugglers and paddlers like Serzh Sargsyan, Markar Melkonian and Monte Melkonian, who deliberately assaulted on Azerbaijani civilians,” he concluded.

You can read the full text of article by clicking here.