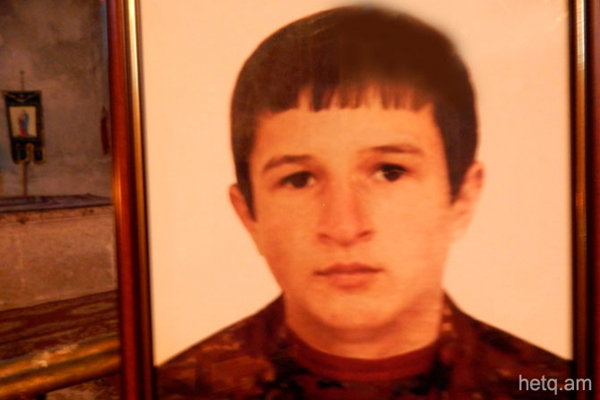 A soldier of the military unit located in occupied Nagorno Karabakh and his commander were arrested nearly two months ago on suspicion of killing soldier Lernik Osyan in mid-February, Osyan’s mother, Susanna Osyan, told Epress.am on Thursday.

“The guy does not accept he is guilty, but there was a murder,” the woman said, adding that she does not know the names of those arrested.

According to the information available to the mother, on the night of February 17 there was some sort of argument between the young men, the details of which, however, are also unknown to her. Osyan, nevertheless, is convinced that her son did not have any problems during his service: “Whenever he’d call, he’d say that everything was fine and that no one disturbed him.”

Osyan, who does not have a lawyer, receives information about the preliminary investigation process from the investigator. The latter has told the mother that her son’s commander – who on the day of the incident had left the soldiers alone and gone to bed – has also been arrested.

According to Susanna Osyan, she was initially told by officers of the Tumanyan community military commissariat that her son’s service weapon had gone off accidentally while Lernik was cleaning it in the night. The woman, however, did not believe this version because the idea that someone would clean a weapon at night seemed absurd to her.

Susanna Osyan lives in the Lori province village of Odzun in a semi-dilapidated house. The woman’s only source of income is her 30 thousand-dram pension. Lernik was her only child.