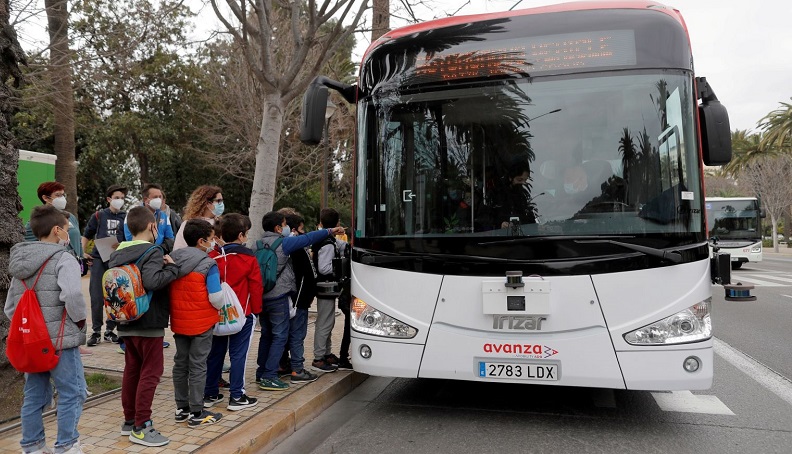 Europe's first driverless bus began picking up passengers in the Spanish city of Malaga over the weekend.

On the outside, the 12-meter (39-foot) bus looks like any other. The bus driver sits in the front seat, taking tickets for the route from the Cruise Ship Terminal to the city's Central Park.

But on closer look, some passengers were stunned when they realized that the bus driver's hands were not on the steering wheel and his feet were not touching the pedals. Like magic, the bus was moving on its own.

As the bus drives by itself, the driver pays close attention, looking at the road and a screen that reflects what the bus is detecting in real-time. For instance, if someone crosses the street, the bus automatically breaks.

The bus sensors, cameras, and GPS technology allow it to react to unexpected events, although the driver has the power to take over.
The Avanza transport group and the city of Malaga led the pioneering project.

"With the launch of this project, Malaga has become an urban laboratory for globally important tests. In having the first standard-sized autonomous bus that is circulating under real conditions, the city reinforces its commitment to sustainable mobility and using new technologies for transport," said the city in a statement.

Hoping to start a revolution in urban transport, the autonomous, electric passenger bus is part of the AutoMOST project, financed by the Spanish government. Its stated goal is to "significantly increase the efficiency, safety and sustainability" of urban transport.

On Feb. 1, Turkish President Recep Tayyip Erdogan also attended the first test drive of an electric, self-driving bus produced in Turkey.
Spain's futuristic bus will continue along its route in Malaga until Mach 13 and then its results will be analyzed. As it runs, researchers will also survey passengers about how they feel catching a ride on a driverless bus.