EUobserver: EU’s role in Nagorno-Karabakh conflict and possibility of peace 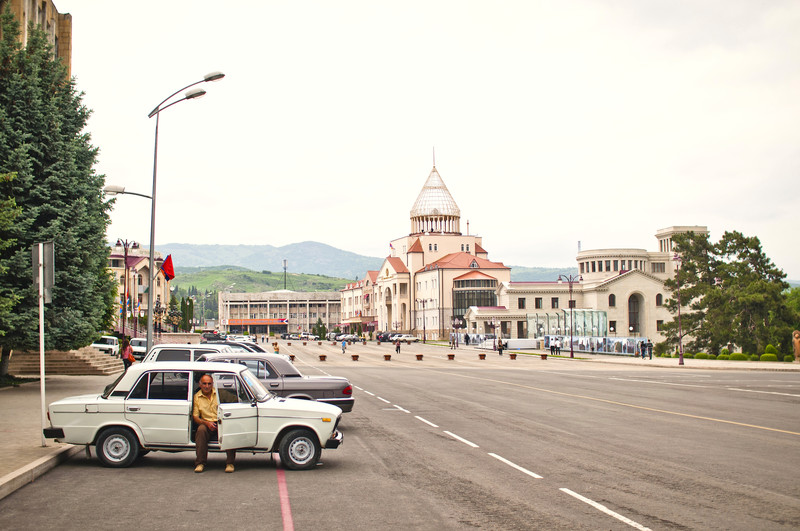 EUobserver has posted an article 'EU's role in Nagorno-Karabakh conflict and possibility of peace' by Rovshan Rzayev.

A notorious saying by Prussian king Frederick, "occupy then legalise", is a vivid illustration of the current policy pursued by officials in Yerevan, in relation to the Armenia-Azerbaijan Nagorno-Karabakh conflict.

As an Armenian diaspora representative, I do regret that the op-ed by Nicolas Tavitian titled “EU needs a policy for peace in Nagorno-Karabakh”, published 28 July on EUobserver, supports the same line of argument, and attempts to divert attention from the real situation on the ground.

The author omits the key fact that the occupation of Azerbaijan’s territories by Armenia with the use of force constitutes the fundamental basis of the Armenia-Azerbaijan Nagorno-Karabakh conflict.

Armenia's military occupation was also accompanied by a bloody ethnic cleansing in the seized lands of more than 700,000 of the indigenous Azerbaijani population, including the Azerbaijani community of Nagorno-Karabakh.

Despite the demands of UN Security Council Resolutions 822, 853, 874 and 884 - on immediate, unconditional and full withdrawal of Armenian troops from the seized territories - Armenia has sustained the occupation for more than 25 years.

The physical presence of Armenian forces in the sovereign territories of Azerbaijan represents an immediate threat to regional peace and security, and undermines the efforts towards the peaceful resolution of conflict.

In the article, the author also somehow contradicts himself. While talking about the “people first” approach, he ignores the rights of one million Azerbaijanis, including the Azerbaijani community of Nagorno-Karabakh, and perceives the occupation as a fait-accompli.

Such an archaic attitude is a road to eternal war, not to sustainable peace. Nowadays, as a result of this policy, Armenia is a self-isolated country in the region, with limited sovereignty.

It is very well known that the only possible way towards resolving the conflict is the withdrawal of Armenian troops from the occupied territories of Azerbaijan, and the return of Azerbaijani internally displaced persons (IDPs), as well as the Azerbaijani community of Nagorno-Karabakh to their homes.

This step-by-step approach towards the conflict settlement also envisages the opening of borders and communications between Armenia and Azerbaijan.

How can the EU support this process? We should be realistic and seek a more comparative advantage of the EU.

First, it is of paramount importance that there is a strong and unified commitment by EU to the principles of territorial integrity, sovereignty and the inviolability of borders of states, as is also asserted by the new EU security strategy, in respect of all protracted conflict in post-soviet areas.

Some lessons could be drawn from the EU-initiated Stability Pact for South-East Europe in 1999. With this pact, it was made clear that EU will never accept attempts to change internationally recognised borders through use of force.

Proceeding from the current proposals on the negotiation table, the EU exerting diplomatic-political pressure on Armenia to withdraw its troops could complement ongoing efforts by the co-chairs of the Organization for Security and Co-operation in Europe (OSCE) Minsk Group.

Based on the experience from other conflict zones, humanitarian and institutional support from the EU, by assisting in the process of the dignified return of Azerbaijani IDPs to their homes, would be an invaluable contribution.

In parallel, the EU can also support the ethnic reconciliation process of the Armenian and Azerbaijani communities in the Nagorno-Karabakh region of Azerbaijan through confidence-building measures.

Speaking as a member of the Azerbaijani community of Nagorno-Karabakh, we would be glad for the resumption of dialogue with the Armenian community, to facilitate ethnic reconciliation.

Denmark and Sweden hold the world record for the most wars fought between two countries. But today they are best friends and partners.

Therefore, on behalf of our community, I completely reject such groundless ideas about ethnic incompatibility of Armenians and Azerbaijanis, as if they cannot live together ever again.

The EU and its individual member states can also share their best experiences on successful models of autonomy, such as the Aaland Islands in Sweden, the Trentino-Alto Adice region in Italy, and others in the context of finding a suitable autonomy model for Nagorno-Karabakh within Azerbaijan.

In the face of rising military rhetoric, the resumption of substantial talks for a settlement on the conflict, in good faith, is more than necessary. Along with the OSCE Minsk Group Co-chairs, the EU also supports this process.

I do agree with the author on one point: peace is possible. Peace will bring enormous benefits to Armenia and its people.

Rovshan Rzayev is a member of the Azerbaijani community of Nagorno-Karabakh, an Azerbaijani parliamentary deputy and co-founder of an Armenian-Azerbaijani peace platform.