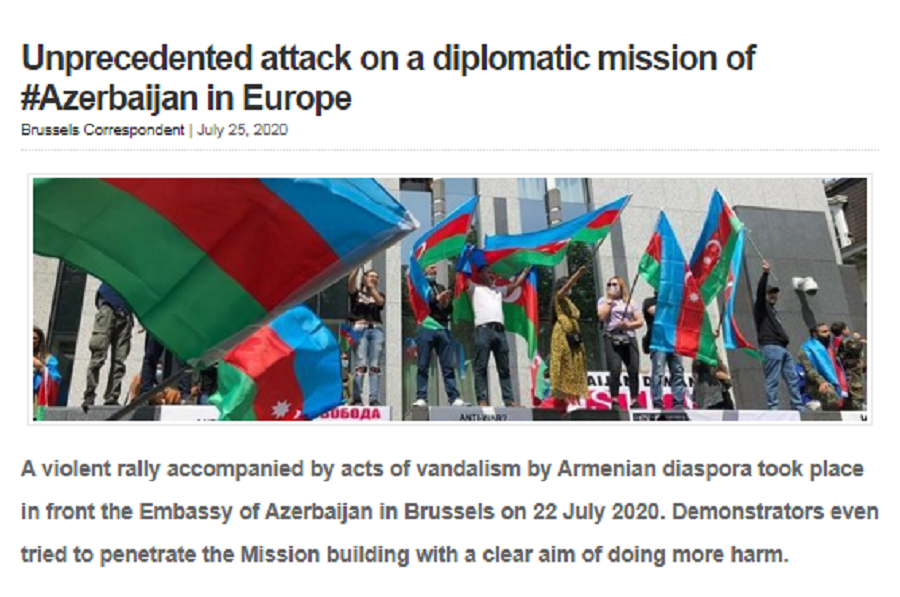 The article, describing illegal actions committed by the Armenian diaspora in Belgium (Comité des Arméniens de Belgique - https://www.armencom.be) in front of the Embassy of Azerbaijan in the Kingdom of Belgium and the Grand Duchy of Luxembourg and the administrative building of the country's representation in the EU, said that a violent rally accompanied by acts of vandalism by Armenian diaspora took place in front the Embassy of Azerbaijan in Brussels.

"This was the continuation of the very recent attack to the premises of the Embassy on 19 July 2020," the article said.

“This is apparently a continuation of radical Armenian rallies and attacks on Azerbaijan in other parts of the world, including Paris, Los Angeles, Netherlands, and Warsaw,” said the article. “The consequences of this rally were clearly a violation of international law, namely the international obligations envisaged in the Vienna Convention on Diplomatic Relations of 1961."

"The victims of this attack are Belgian nationals and all MEPs call on the Belgian government to show determination and act in accordance with Belgian law and its international obligations as a host country to punish all those involved in such violence in the heart of Europe," the article said.

The article also included a video posted on the Instagram page of the Armenian Diaspora in Europe, which clearly exposes the mentioned atrocities. This is documentary evidence that reveals the essence of Armenia.