EU leaders give Merkel an ovation at final summit 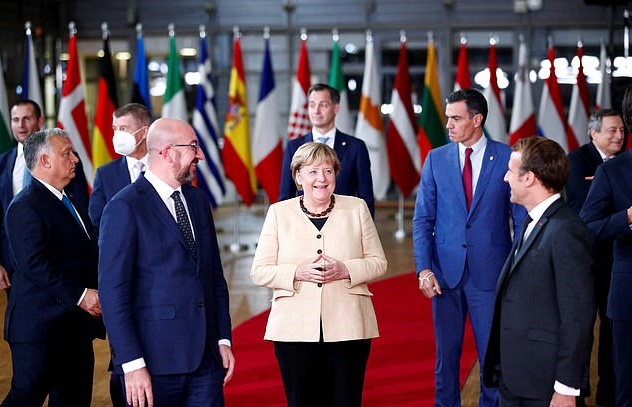 Last week I waited in a packed press pen for German Chancellor Angela Merkel to descend the stairs at the Egmont Palace in Brussels, BBC reports.

She'd already had lunch with King Philippe and later would go to a farewell concert featuring the works of Mozart and Beethoven. In other words, they were laying it on for her.

"You've always kept your cool," she was told by Belgium's Prime Minister Alexander de Croo as they prepared to face the media.

And she certainly appeared calm, even poker-faced, despite the heavy outpouring of warm words. Others might have blushed, maybe even visibly enjoyed it.

After 16 years as chancellor, she's been to many European Council (EUCO) summits - 107 is the popular number floating around.

Frankly, after all those emergency EU summits and the odd "virtual" event, I've been advised that it's hard to be entirely sure. But we're talking big numbers.

On Friday she took her seat at the table to deliberate for the last time. Also to absorb more compliments, some of them are slightly unusual.

Council President Charles Michel declared her a "monument" and said summits without the long-time chancellor were like Paris without the Eiffel Tower.

He praised her "extreme sobriety and simplicity", which he said was "a very powerful seduction weapon".

"You are a compass," he said, "a shining light of our European project".