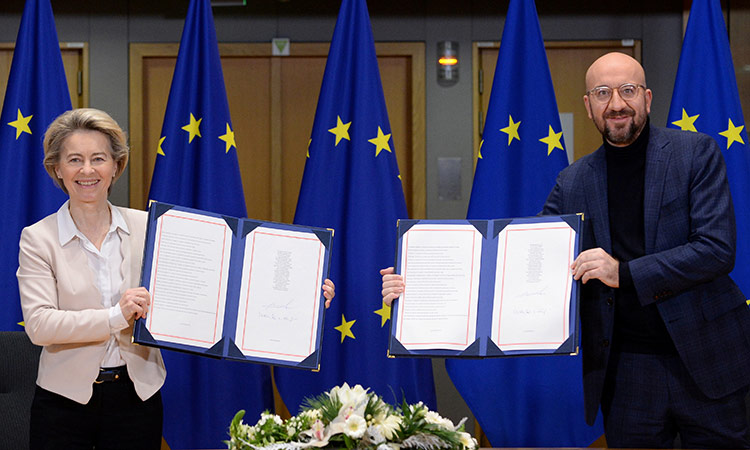 The texts were then to be flown to London in an RAF jet for the signature of UK Prime Minister Boris Johnson, on the eve of Britain's departure from the EU single market.

According to Downing Street, Johnson will tell MPs that the agreement heralds "a new relationship between Britain and the EU as sovereign equals, joined by friendship, commerce, history, interests and values".

The government only released the accompanying UK legislation on Tuesday afternoon – less than 24 hours before the debate is to start in parliament an hour after the signing in Brussels.

The government intends to ram all stages of the 85-page European Union (Future Relationship) Bill through the Commons and the House of Lords in one day, before the EU trade deal takes effect at 11pm GMT on Thursday.

At that hour – midnight in Brussels – the UK will be entirely out of the EU, following an 11-month transition period in place since Brexit took legal effect and more than four years after Britons voted to leave in a divisive referendum.

Each side will work "hand-in-glove whenever our values and interests coincide, while fulfilling the sovereign wish of the British people to live under their own laws, made by their own elected parliament", Johnson will say.

The agreement averted the prospect of a cliff-edge separation that would have seen quotas and tariffs slapped on all cross-Channel trade, exacerbating strains in the middle of the coronavirus pandemic, which has hit Britain harder than most.