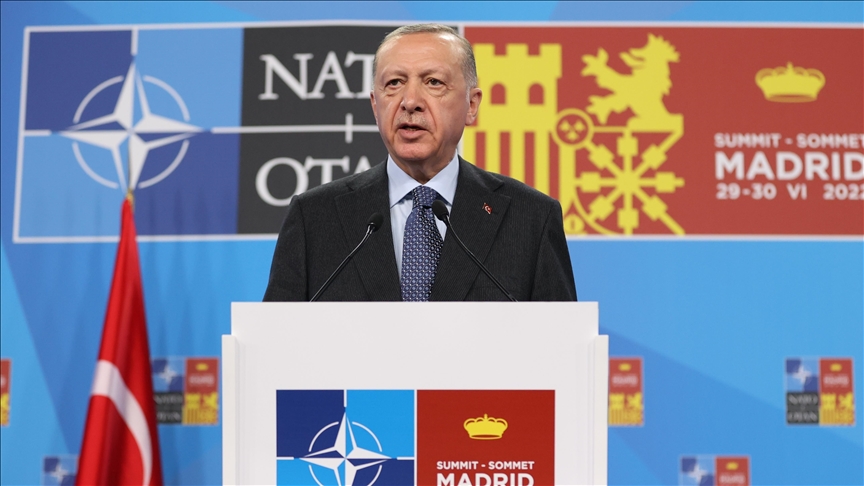 As a result of Türkiye's efforts in Madrid, PKK/PYD/YPG and FETO were written off as terror groups in NATO's records for the first time, said the Turkish president on Friday, News.Az reports citing Anadolu Agency.

Speaking to reporters while returning from the NATO summit, Recep Tayyip Erdogan said the decisions taken at Madrid will bear fruit in time.

“Promises that were made are of course important but the main point is the implementation," he said on the landmark memorandum signed between Finland, Sweden and Türkiye.

With the signing of the memorandum, Türkiye lifted an objection to the Nordic countries' NATO bid. In return, Finland and Sweden will address Türkiye's terrorism concerns.

However, Erdogan said Türkiye will be cautious as "a country that has repeatedly been stabbed in the back in its fight against terrorism."

"We will closely monitor whether the promises made to our country are fulfilled in the coming period," he further said.

On relations with Greece, Erdogan said that NATO leaders whom he met in Madrid offered to intermediate to organize talks with Greek Prime Minister Kyriakos Mitsotakis.

“We said ‘sorry, but we don’t have time for such a meeting right now.’ Because it is obvious that they are militarizing the islands,” said Erdogan.

In the backdrop of NATO's new security policy, Erdogan said his country is maintaining a "balanced policy" in relations with Russia and Ukraine, as it does not want any harm to its "diplomatic traffic".