End has been put to mythology, nobody talks about “invincible Armenian army” any more – Azerbaijani president 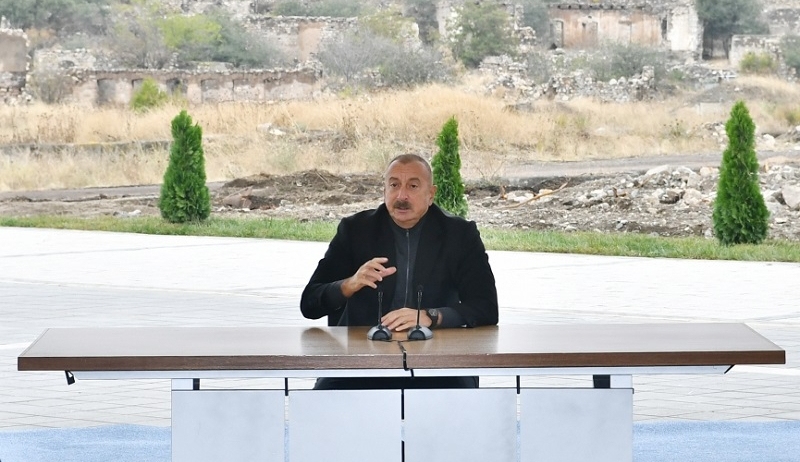 An end has been put to this mythology. Nobody talks about the “invincible Armenian army” any more, President of Azerbaijan Ilham Aliyev said as he met with members of the general public of Jabrayil on October 4.

“We are rightly proud and will always be proud of our servicemen. They are the real heroes. We are proud of all our people. Because the solidarity and unity shown during these 44 days showcased the Azerbaijani people in the whole world as a very dignified and great nation. The fist, a symbol of our victory, is not only a symbol of strength, it is also a symbol of our unity. We joined our forces and achieved what we wanted by restoring historical justice. Notice what statements Armenia is making now. There are no traces left of the myths they had been inventing for 30 years. Where is their “victorious” army? Where is the “invincible” Armenian soldier?”

President Aliyev stressed that those engaged in ugly propaganda against Azerbaijan for 30 years and trying to humiliate the dignity of the Azerbaijani "people have already taken their share, have learned their lesson.

“No-one in the world is saying a word about “victorious Armenian soldiers”. After all, what kind of bravery and heroism can we talk about in an army of 10,000 deserters? Nobody talks about the “invincible Armenian army” any more. There is no Armenian army. We have crushed it. We have destroyed it from the bottom up. We have destroyed all the equipment they had been collecting for 30 years. Part of it is displayed in the Spoils of War Park. We have destroyed their troops. The Azerbaijani people did it and showed their superiority,” he said.