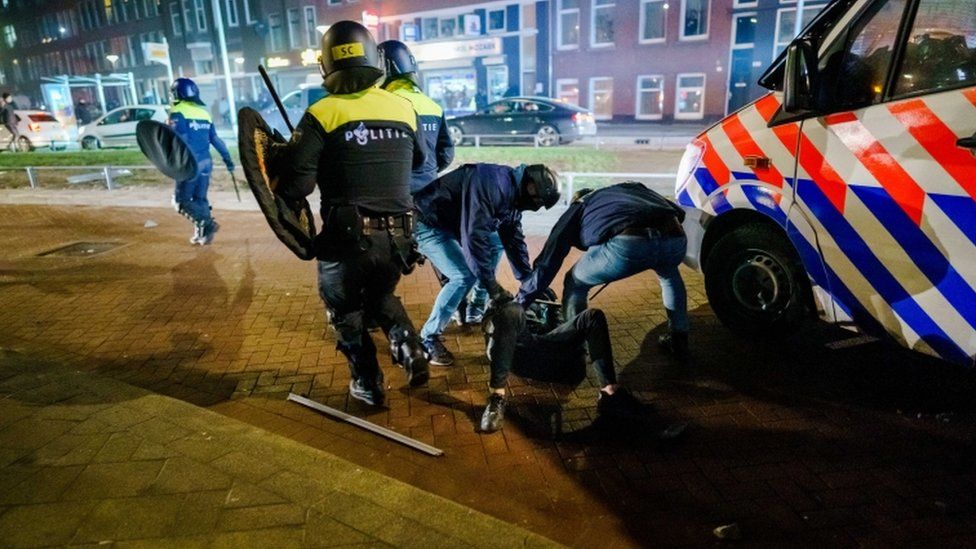 Dutch police detained more than 180 people in a third night of unrest in cities across the Netherlands, where roaming groups of rioters set fires, threw rocks and looted stores in violence triggered by a night curfew aimed at curbing the coronavirus, Reuters reports.

The first curfew since World War Two followed a warning by the National Institute for Health (RIVM) over a new wave of infections due to the “British variant” of the virus, and was imposed on Saturday despite weeks of declines in new infections.

“We have had riots in the past, but it’s rare to have this for several nights across the entire country,” said National Police spokeswoman Suzanne van de Graaf. “It’s not only in known problem areas, but much more widespread.”

Riot police with shields and batons were called out in more than 10 cities, many of which had issued emergency ordnance to provide officers with greater powers to conduct searches.

Police scuffled with rioters in several cities late into the night, chasing them down narrow streets with vans or on foot as helicopters hovered overhead.

In the capital Amsterdam, groups of youths threw fireworks, broke store windows and attacked a police truck, but were broken up by massive police presence.

Ten police were injured in Rotterdam, where 60 rioters were detained overnight after widespread looting and destruction in the city centre, a police spokeswoman said. Supermarkets in the port city were emptied, while rubbish bins and vehicles were set ablaze.

Schools and non-essential shops across the Netherlands have been shut since mid-December, after bars and restaurants were closed two months earlier.