COVID-19 cases climb amid calls for vaccinations in Turkey 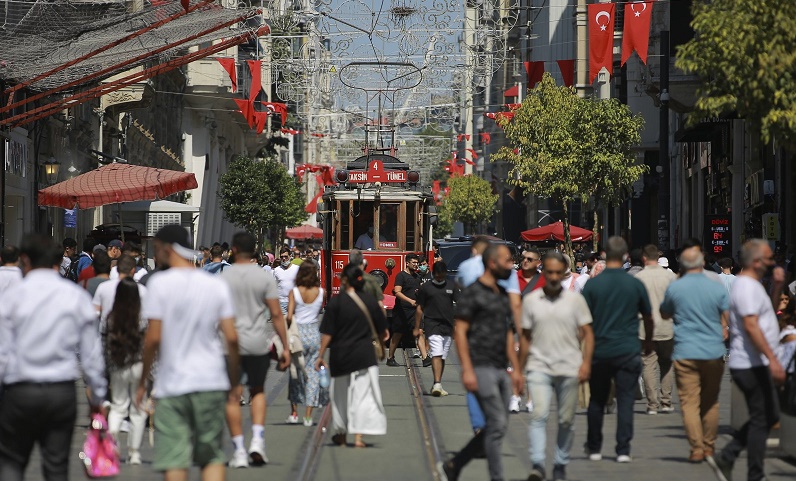 Turkey reached nearly 20,000 in new daily COVID-19 cases, with the pandemic showing a steady climb in the past few weeks, Daily Sabah reports.

The latest weekly figures on the state of each of the 81 provinces of Turkey demonstrate the dire levels the country has reached after a brief respite from the pandemic last month.

Siirt, an eastern province, had the most cases, with 748.3 cases per 100,000. It had the highest increase in weekly cases, ahead of Diyarbakır and Bitlis, two other eastern provinces and the northern province of Giresun, as well as Iğdır in the east.

As he published the weekly numbers via his Twitter account, Health Minister Fahrettin Koca called the public “not to endanger the power to control the outbreak.”

“We have to get vaccinated and follow the rules,” he warned. Koca also noted the “relationship” between the rise in cases and the vaccination rate.

Turkey reached nearly 70 million doses in its vaccination campaign launched in January 2021. More than 40 million people had their first doses, and another 24.8 million had both their doses. Experts say Turkey has to vaccinate at least 70% of the population with two doses to reach the mass immunity necessary to curb the pandemic.

The country strives to juggle the increased demand from the public and businesses for normalization and an effective fight against the pandemic. On July 1, all curfews and similar restrictions were lifted nationwide, following a strict 17-day lockdown which helped decrease the daily number of cases to around 5,000. Relying on vaccination which sped up before the normalization process, the country managed to pull down the numbers for a while.

However, an inevitable rise in case numbers surfaced again earlier this month. People ditching the mandatory mask rule, social distancing and hygiene rules during the normalization period, and higher mobility are seen to be the culprits of the increase.

Vaccine hesitancy, which particularly prevailed in the eastern regions, is also to blame for the surge. Professor Kemal Memişoğlu, head of the Directorate of Health in Istanbul, said those who tested positive “increased 50%” and they faced a "risk of a fourth wave."

The fourth wave is something recently be voiced more by experts amid concerns over the fast-spreading delta variant. Turkey reported hundreds of delta cases, while the number of delta plus cases still stands at three.

Memişoğlu told Ihlas News Agency (IHA) Wednesday that August was “a critical month” for them regarding the surge in cases because it will show the impact of infections in July. “Positive cases increased by 50% compared to figures from two weeks ago. We also see a slight rise in the number of hospitalizations since last week,” Memişoğlu said.

He said 65% of the population in Istanbul was vaccinated, and people at the age of 65 and above exceeded a vaccination rate of 88%. “We now call those with two doses to have their third dose as soon as possible. We are still low in terms of third dose vaccinations,” he said.

Third or booster doses to regain efficiency of vaccines are being administered across the country since the beginning of this month.

“The situation in August will determine the course of the pandemic in September and October,” Memişoğlu warned.

The autumn is vital to either curb the pandemic or sees a new wave of infections, as it is a season when more people spend time indoors and are forced to ignore social distancing in crowded places.