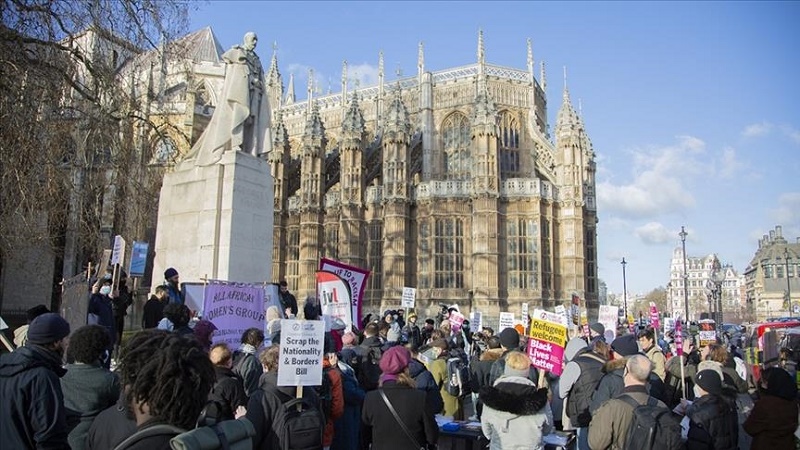 With the controversial Nationality and Borders Bill reaching the British House of Lords for further debate, opposition to the legislation is growing, with a measure allowing for easier revocation of citizenship drawing especially sharp criticism, Anadolu Agency reports.

Article 9 of the bill, titled “Notice of decision to deprive a person of citizenship,” has been under fire by human rights groups, non-governmental organizations (NGOs), and various community leaders since the bill’s introduction in parliament.

The clause, if it receives Royal Assent without changes in later stages, would give extended powers to the Home Office to revoke the citizenship of any individual.

The bill, commissioned by Home Secretary Priti Patel, also includes an article that would criminalize illegal arrivals of those seeking asylum in the UK.

Criticizing this aspect of the bill on the first day of debate at the House of Lords, Lord Rosser said the Refugee Convention “provides that states shall not impose penalties, on account of their illegal entry or presence, on refugees where their life or freedom was threatened.”

“And (if) they present themselves without delay and show good cause for their illegal presence for entry,” he added.

Lord Rosser also said that “if all countries were to take this approach of criminalizing those who enter illegally, for the purposes of claiming asylum, the entire international system for refugee protection would fall apart.”

Baroness Sayeeda Warsi also took a stand against the bill during debate.

“These laws have the potential to include members of parliament and their families. They include our loved ones, friends, and colleagues. They include some of us,” she said.

“This is not scaremongering, this is fact. And this is why families across our country are campaigning to push back against the real-life consequences they are today experiencing as a result of years of incremental legislation.”

Speaking to Anadolu Agency, Gurpreet Singh Anand, secretary general of the Sikh Council UK, said the new legislation would give the government “the ability to clamp down on people who they feel are a problem.”

He said “this doesn't mean that that person is a criminal or they've done something wrong.”

“The Nationality and Borders bill adds to existing powers that the government already has, which enable it to tell people of color, Muslims and those who have ancestry in foreign countries to make them second-class citizens,” said Anas Mustapha from CAGE, a London-based advocacy group working to empower communities impacted by the war on terror.

“So the white people in the UK, they will be considered, as you know, first-class citizens, and those of color will be second-class citizens depending on their good behavior.

“So if they misbehave, if they commit certain crimes, if they traveled to certain countries, then the home secretary has the right to deprive them of their nationality,” he added.

Naomi Wimborne-Idrissi, media officer of the Jewish Voice for Labour, told Anadolu Agency that the new law is “deeply racist.”

“In the past, you had to be able to prove that someone was a terrorist threat or something really serious like that. But now, they're in a position where they can pretty well define as an unwanted person someone whose views or political activities … they are not in favor of,” she argued.

“And also, it's going to apply almost exclusively to people who have black or brown skin complexions.

“So it's deeply racist. And it brings with it the danger of a second-class sort of second-tier society,” she added.

The bill is currently at the committee stage at the House of Lords, where amendments are expected to be proposed.