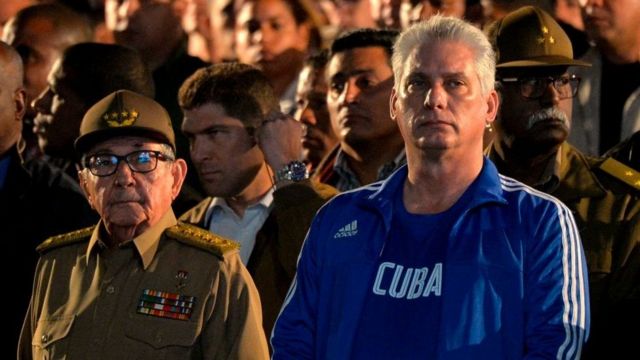 Mr Díaz-Canel, who in 2018 succeeded Mr Castro as Cuba's president, had been widely tipped for the arguably more influential post of party leader.

The transition means that the island will be governed by someone other than Fidel or Raúl Castro for the first time since the Cuban revolution in 1959.

Mr Díaz-Canel is seen as loyal to the Castros and their economic model.

Speaking on Friday, when Mr Díaz-Canel had not been officially named yet as first secretary, Raúl Castro said that he would hand over the leadership to a younger generation "full of passion and anti-imperialist spirit".

At 60, Mr Díaz-Canel is almost 30 years younger than his predecessor.

It follows the announcement on Friday - on the first day of the party's four-day congress - that Raúl Castro was stepping down from the key position of first secretary.

The 89-year-old had been in the post since 2011, when he took over from his older brother, Fidel Castro.