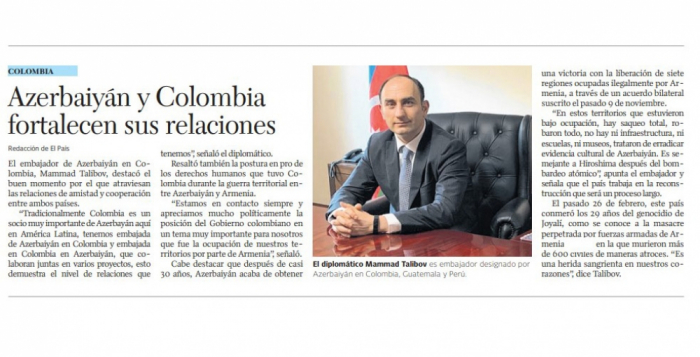 El Pais, one of Colombia’s leading media outlets, has published an article on Azerbaijan-Colombia relations based on an interview with Azerbaijani Ambassador Mammad Talibov, News.Az reports.

The article remembers the 29th anniversary of an act of genocide committed by the Armenian armed forces in the Azerbaijani town of Khojaly on February 26, 1992, which claimed the lives of more than 600 civilians.

It also notes that after 30 years, Azerbaijan has liberated its lands from the Armenian occupation after the 44-day Patriotic War.

The Colombian newspaper further highlights the ongoing reconstruction and restoration work in the liberated Azerbaijani lands.

The newspaper, citing the Azerbaijani diplomat, stresses that Colombia is one of the traditional partners of Azerbaijan in the Latin American region.