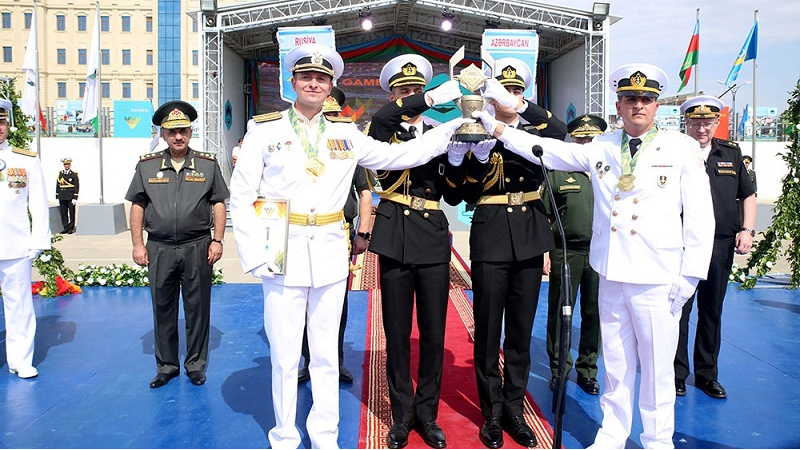 Baku hosted the closing ceremony of the "Sea Cup" contest held in the territorial waters of Azerbaijan as part of the International Army Games 2020, the Azerbaijani Defense Ministry reports.

The scenarist and presenter of the event, Honored Art Worker, individual presidential pensioner, Colonel Abdulla Gurbani addressed the participants with a welcoming speech.

The Chairman of the Organizing Committee of the "Sea Cup" contest, Lieutenant General N. Osmanov, spoke about the course and results of the contest.

The winning teams were presented with a cup, medals, and valuable gifts.

The National Anthems of Azerbaijan and Russia whose teams, having gained equal points in the competition, became the winners of the championship, were performed.

General of the Army R. Tsalikov, speaking at the ceremony, thanked the leadership of Azerbaijan for the high level of organization of the "Sea Cup" contest and hospitality.

Lieutenant General K. Veliyev, speaking at the event with the closing speech, emphasized that the contest serves to better acquaint the military seamen of the Caspian countries, strengthen mutual relations and cooperation, create an atmosphere of friendship between servicemen. He conveyed the congratulations of the Minister of Defense of Azerbaijan, Colonel General Zakir Hasanov to the event participants and declared the "Sea Cup" contest closed.