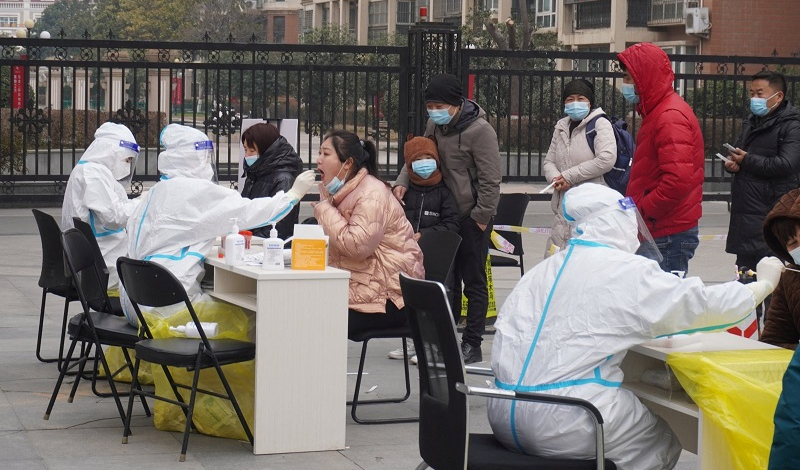 The city of Zhengzhou ordered its 12 million residents to take COVID-19 tests Wednesday after a handful of cases were detected, as China fights to stamp out virus clusters ahead of the Winter Olympics, News.Az reports citing AFP.

Everyone in Zhengzhou, which has been placed under a partial lockdown, must be tested to "thoroughly uncover infections hidden among the public," the city's government said in a statement Wednesday.

The mass-testing order came as case numbers in the locked-down city of Xi'an fell to their lowest in weeks, with officials saying that outbreak had been "brought under control."

Xi'an's 13 million residents have been under stay-at-home orders for the last fortnight.

"Although the case number has been high for many days, the rapid rise in COVID spread at community level has been brought under control compared with the early stages of the outbreak," said Ma Guanghui, deputy director of Shaanxi province's health commission, at a press conference.

"The epidemic is showing a downward trend."

China has stuck to a rigid approach of stamping out COVID-19 cases when they appear, with tight border restrictions and targeted lockdowns since the virus first emerged in the country in 2019.

But, with less than a month to go until the Olympics, a series of small outbreaks across the country has put the strategy under pressure.

Although the number of reported cases in China is very low compared with other nations, infections in recent weeks have reached a high not seen in the country since March 2020.

China recorded 91 cases Wednesday – including 35 in Xi'an, the city's lowest tally since mid-December.

The Zhengzhou outbreak is tiny by comparison, but officials are taking no chances.

State media said about 500 close contacts had been traced from the outbreak's two symptomatic cases, linked through mahjong rooms and family gatherings.

Eight residential communities were locked down.

On Monday, 1 million people in Yuzhou city – in the same province as Zhengzhou – were put under stay-at-home orders after three asymptomatic cases.

Local authorities deemed to have failed in preventing virus outbreaks have been sacked or punished, including two senior Communist Party officials in Xi'an that were dismissed over their "insufficient rigor in preventing and controlling the outbreak."

Dozens of officials were punished for their handling of Xi'an's outbreak, including the official in charge of the city's health tracking system, who was suspended.

China will host the Winter Olympics from Feb. 4, under some of the strictest rules for a mass sporting event since the pandemic started.

All athletes, officials, staff and volunteers will be within a "closed loop" system for the duration of the Games that separates them from the public.