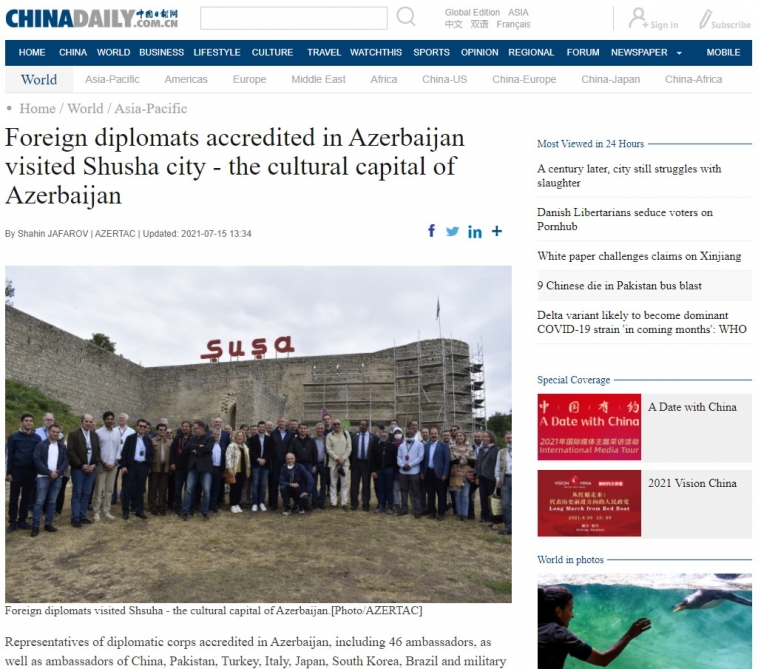 The article reads: “Representatives of diplomatic corps accredited in Azerbaijan, including 46 ambassadors, as well as ambassadors of China, Pakistan, Turkey, Italy, Japan, South Korea, Brazil and military attachés, heads of representative offices of some international organizations visited Shusha city – the cultural capital of Azerbaijan, on July 9. The purpose of the visit was to familiarize foreign diplomats with the restoration and reconstruction work carried out in Shusha, with the original architecture of the city and the national and cultural heritage of the Azerbaijani people.

Within the visit foreign diplomats visited a number of historical and religious-architectural monuments, the central square of the city, the mosques of Saatly, Yukhary Govharagha, Ashaghy Govharagha, the Khan Gizi spring, fortress walls, the palace of Panakhali Khan, Gazanchy Church and other places.

Before Shusha, the diplomats had visited the Fuzuli district, where they viewed the construction of the international airport and the activities of a substation.

During the visit to Shusha city, representatives of the diplomatic corps in Azerbaijan visited the place where the remains of the Panah Ali Khan's palace, the Mehmandarovs' complex are located and reviewed the repair work being carried out in the Gazanchy Church.

Diplomats inspected the ruins and were briefed on the history of the Panah Ali Khan’s palace, which was vandalized during the occupation.

Diplomats were informed about the destruction in the Mehmandarovs complex. It was greatly damaged during the war, but the complex is currently being restored.

Then the representatives of the diplomatic corps visited the Gazanchy Church, where they were informed that the large-scale restoration work is being carried out by Azerbaijan in the liberated territories, including the process of restoration and construction in Shusha, in accordance with the original architectural style of the city. The Gazanchy Church is also being restored as part of the ongoing restoration work.

The Gazanchy Church is located in the upper part of Shusha city. The church, which consists of four semicircular ledges, was built on the site of an ancient Zoroastrian temple in 1868-1887.

The building is covered inside with local carved stone without any special architectural decorations.

"With diplomatic corps we finished our visit to beautiful Shusha - cultural capital of Azerbaijan. Ambassadors received first hand information on the ground about destroyed cultural monuments and took note on restoration and conservation plans," Hikmat Hajiyev, Assistant of the President of the Republic of Azerbaijan said on Twitter.”