Black page of Azerbaijan's history is behind us, we are able to breathe again - President Aliyev 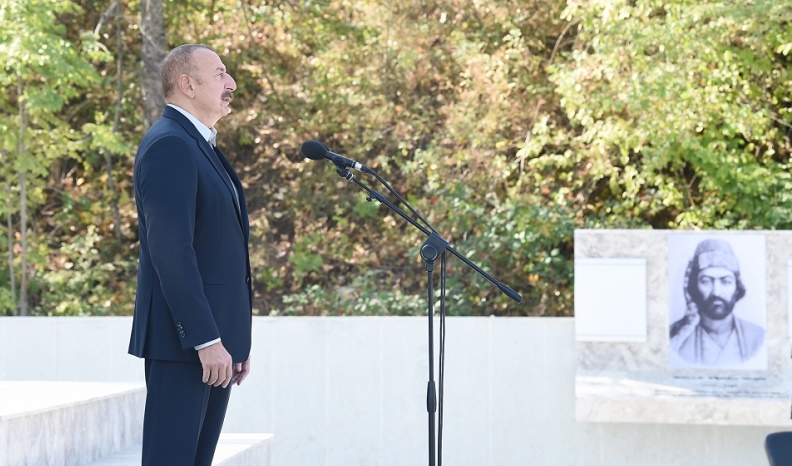 The black page of Azerbaijan's history is behind us and we are able to breathe again, President of the Republic of Azerbaijan Ilham Aliyev said addressing the official opening ceremony of the Vagif Poetry Days in Shusha.

“The revival of Shusha is progressing rapidly and the people of Shusha are returning to the city," President Aliyev said. "Groups of people are coming to visit their hometown. At the same time, natives of Shusha are provided with jobs at the facilities that have already been opened here. So we will revive Shusha."

"Dear friends, about 40 years ago my father was standing here, while I was standing over there," the president said. "We were gathered for the opening of Vagif's mausoleum in frosty and snowy weather. Then, on 29 July 1982, I came to Shusha for the second time with my father. At that time, the Vagif Poetry Days were held."

"Today we are celebrating the opening of Vagif's mausoleum for the second time," the president said. "My father was 59 years old when the Vagif Poetry Days were held. I am 59 years old now. Some may think that this is a coincidence. But I think that there is great symbolic meaning in that. History repeats itself."

"During the occupation, many of us – both former IDPs and the rest of the Azerbaijani people, including myself – repeatedly thought that there is no justice in the world," President Aliyev said. "Because if there was justice, we would not be in this situation. I was of the same opinion."

"While giving the good news of Shusha to the people of Azerbaijan on 8 November, I said that Shusha is already liberated, this is the truth," President Aliyev said. "We are gathered in a liberated Shusha. I said that we have returned to Shusha. This is also true. Festivals, poetry days, cultural and many other events are already being held and will continue to be held. I said that we would revive Shusha. This is happening."