BBC News: How Azerbaijan’s capital Baku built on its heritage to become a beacon of modern architecture 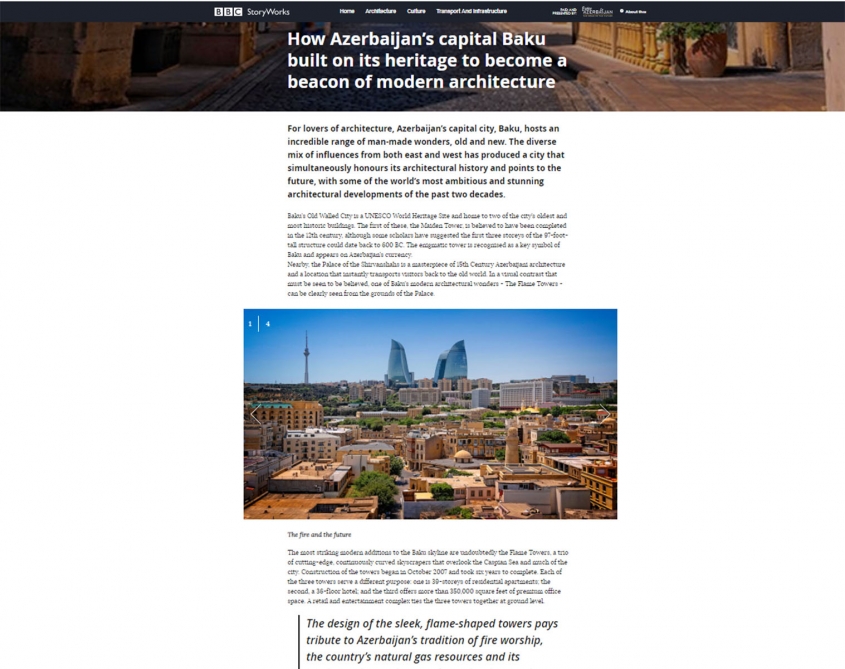 BBC News has posted an article titled “How Azerbaijan’s capital Baku built on its heritage to become a beacon of modern architecture”, highlighting modern and historical architectural landmarks of Azerbaijan.

The article reads: “For lovers of architecture, Azerbaijan’s capital city, Baku, hosts an incredible range of man-made wonders, old and new. The diverse mix of influences from both east and west has produced a city that simultaneously honours its architectural history and points to the future, with some of the world’s most ambitious and stunning architectural developments of the past two decades.

Baku’s Old Walled City is a UNESCO World Heritage Site and home to two of the city’s oldest and most historic buildings. The first of these, the Maiden Tower, is believed to have been completed in the 12th century, although some scholars have suggested the first three storeys of the 97-foot-tall structure could date back to 600 BC. The enigmatic tower is recognised as a key symbol of Baku and appears on Azerbaijan’s currency.

Nearby, the Palace of the Shirvanshahs is a masterpiece of 15th Century Azerbaijani architecture and a location that instantly transports visitors back to the old world. In a visual contrast that must be seen to be believed, one of Baku’s modern architectural wonders - The Flame Towers - can be clearly seen from the grounds of the Palace.

The fire and the future

The most striking modern additions to the Baku skyline are undoubtedly the Flame Towers, a trio of cutting-edge, continuously curved skyscrapers that overlook the Caspian Sea and much of the city. Construction of the towers began in October 2007 and took six years to complete. Each of the three towers serve a different purpose: one is 39-storeys of residential apartments; the second, a 36-floor hotel; and the third offers more than 350,000 square feet of premium office space. A retail and entertainment complex ties the three towers together at ground level.

When Azerbaijan gained its independence from the Soviet Union in 1991, there was an ambition to make Baku a world centre of modern architecture. As part of the effort to break away from the functional Modernist architecture of the Soviet era, one of the most remarkable developments to arise from the initiative is the Heydar Aliyev Center, designed by world-famous architect Zaha Hadid. The sweeping curves announced the arrival of a new era for Baku in 2006. The Center houses a conference hall, a gallery and a museum, and plays an integral role in the cultural life of the city.

Another major landmark is the stunning Heydar Mosque, built in honour of the ancient Azerbaijani architectural style, complete with towering minarets and beautiful domes. Baku is also home to the beautiful Bibi-Heybat Mosque, a ’90s-built recreation of a 13th Century mosque.

Students of architecture will find no end of delights and surprises in Baku. From the Little Venice area of the city (featuring man-made canals) to the incredible Azerbaijan Carpet Museum, which honours the country’s long tradition of carpet making and is, itself, built in the shape of a rolled-up carpet. Opened in 2014, the museum is dedicated to the work of Latif Karimov, Azerbaijan’s best-known carpet weaving artist.

Notable remnants from the Soviet era of Baku’s 20th Century history include the imposing memorial to Richard Sorge, who alerted Soviet high command to Operation Barbarossa, in the city’s Zorge Park. Facing Baku Boulevard, the baroque-style Government House, designed by famous Soviet architect Lev Rudnev and completed in 1952, is still home to the state ministry offices of Azerbaijan today.

Additional modern architectural highlights include the beautiful SOCAR Tower, which is in fact composed of two towers that curve around each other as they rise 209 meters in height. Housing 42 floors of office space and conference facilities, the tower is resistant to wind speeds of 190 km/h (120 mph) and an earthquake measuring nine on the Richter scale.

With its track record and global reputation of supporting cutting-edge, world-class building design, Azerbaijan looks set to attract many more of the world’s most exciting and innovative architectural developments in the years ahead.”