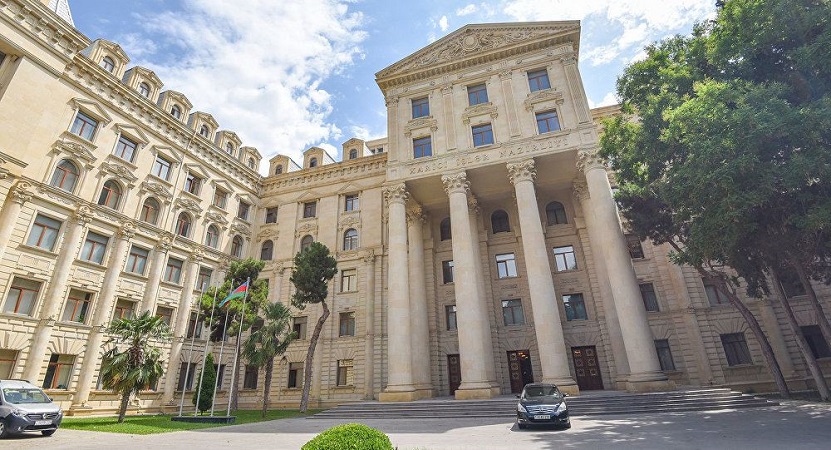 The remarks voiced by Armenian Foreign Minister Zohrab Mnatsakanyan during a briefing in Moscow contain a number of traditionally incorrect points, the Azerbaijani Foreign Ministry said in a statement on Tuesday.

It reminded that the present political-military leadership of Armenia for the past 2 years has been taking steps intentionally and deliberately to escalate the situation around the conflict.

“These steps included provocative statements and other measures which seriously undermined the negotiation process and brought into a deadlock. They also included numerous practical actions to consolidate the illegal results of aggression by Armenia against Azerbaijan and continued military occupation of Azerbaijan’s internationally recognized territories. The most obvious examples include the “Karabakh is Armenia, period” statement, the “new war for new territories” military concept, a military provocation at the Tovuz direction of the Azerbaijan-Armenia border in July 2020, a campaign to settle the Lebanese Armenians in the occupied territories,” read the statement.

The ministry regarded the attack launched against Azerbaijan by armed forces of Armenia on 27 September as another step in this destructive policy of escalation.

“As a sovereign state, the Republic of Azerbaijan took relevant steps within its right to self-defense under Article 51 of the UN Charter. As a result, a number of Azerbaijani territories were liberated from Armenia’s occupation. Regretfully, Armenia resorted to the traditional terror tactics, launching massive shelling the peaceful population and civilian infrastructure of Azerbaijan, including those located at a great distance from the conflict zone. Since 27 September, 42 Azerbaijani civilians were killed and 206 wounded by fire opened by the armed forces of Armenia, as well as 1479 houses, 66 residential buildings and 241 civil facilities destroyed,” the statement said.

Showing its goodwill, Azerbaijan reacted positively to the appeals by the Russian Federation, attended the Moscow meeting of 3 Ministers and negotiated there in a constructive manner, the ministry said “Azerbaijan declared its commitment to the humanitarian ceasefire agreed upon at the meeting and instructed its Armed Forces accordingly.”

“Armenia, however, chose a very different path. Its armed forces opened mortar fire at the Azerbaijani medical team collecting bodies of Armenian military personnel in the vicinity of Suqovushan, Tartar district of Azerbaijan. As a result, Azerbaijani medical personnel was wounded heavily. Furthermore, at 2 am on 11 October armed forces of Armenia launched a ballistic missile on Ganja, Azerbaijan’s second largest city. The missile hit and destroyed a multi-floor residential building. 10 civilians were killed and many more injured, including children,” it noted.

Baku stated that Armenia’s diplomatic actions in the aftermath of the Moscow meeting are also quite revealing.

“The final statement of the Moscow meeting reaffirmed the commitment to the existing negotiation format and envisaged the start of substantive talks upon the basic principles. Azerbaijan declared its readiness to engage in the talks at the soonest. In its turn, Armenia immediately started issuing statements, which reflected a one-sided and inaccurate interpretation of the Moscow meeting statement, repeating slogans of self-determination and recognition of the illegal regime established by Armenia in the occupied territories of Azerbaijan.

“Azerbaijan finds such an approach to be completely non-constructive, as it violates the letter and spirit of the norms and principles of international law, the UNSC resolutions, OSCE decisions, as well as provisions of the Moscow meeting statement,” the ministry concluded.