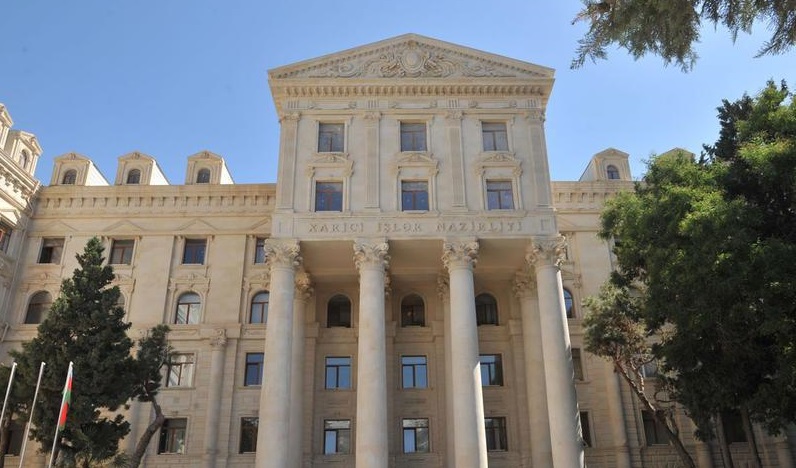 The Armenian Foreign Ministry’s statement trying to present the position of Armenia as “peaceful” against the backdrop of the recent statement by this country’s prime minister emphasizing that “there is no diplomatic solution to the conflict” is absolute balderdash, the Azerbaijani Foreign Ministry said in a statement on Thursday.

The ministry reminded that Armenia imposed war on Azerbaijan, kept the Azerbaijani territories, including Nagorno-Karabakh and seven adjacent regions under military occupation nearly for three decades and grossly violated the fundamental human rights of up to one million IDPs who have been forcefully expelled from their homes.

It stressed that the new aggression of Armenia against Azerbaijan since September 27, 2020, has been accompanied by the blatant violation of norms and principles of international law, including international humanitarian law and Geneva Conventions.

“Reference to the international humanitarian law in the statement of the Armenian Foreign Ministry, the country that bears full responsibility for the heinous crimes it has committed in the course of the war, including its recent war crimes and crimes against humanity, by deliberately shelling the Azerbaijani peaceful population and civilian infrastructures not only in the vicinity of frontline but also those situated far from the conflict zone in a gross violation of humanitarian ceasefire is nothing but hypocrisy,” read the statement.

The Azerbaijani ministry urged Armenia to quit its attempt to mislead the international community by giving erroneous statements.

“The reality on the ground is clear and obvious; Armenia should give up its policy of aggression, withdraw its forces from the occupied territories of Azerbaijan and start to be engaged in the negotiated settlement of the conflict. The sooner the leadership of Armenia realizes it, the more chances the country will have to avoid further escalation and bloodshed,” the statement said.