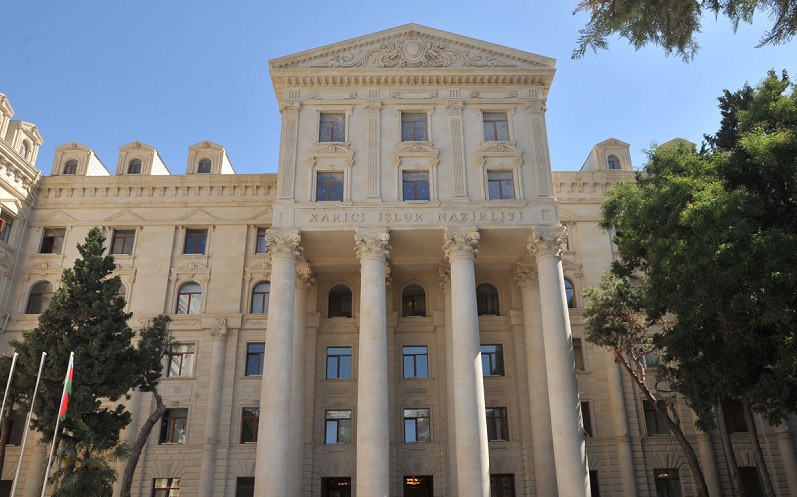 Azerbaijan calls on Armenia to respect the fundamental principles to ensure peace, security, and prosperity in the region and comply with its international obligations, the Azerbaijani Foreign Ministry said in a statement on Tuesday, News.Az reports.

The statement was made on the occasion of September 27 – the Day of Remembrance in Azerbaijan.

These measures, which marked the beginning of the 44-day Patriotic War, were carried out within the framework of the right to self-defense and in full compliance with international humanitarian law in order to stop the recurrent military aggression by Armenia and to provide for the security of the civilian population,” said the statement.

The ministry recalled that the Patriotic War put an end to Armenia’s nearly 30-year-long military aggression against the sovereign lands of Azerbaijan, ensured the territorial integrity of Azerbaijan, and restored the fundamental rights of nearly one million Azerbaijanis.

“Azerbaijan fought alone to ensure the implementation of the relevant UN Security Council resolutions of 1993.”

It stated that putting an end to the occupation of Azerbaijan's territories revealed the scale of massive illegal activities by Armenia on these lands for last three decades. “Clear evidence of widespread mining of Azerbaijani lands, the deliberate destruction and misappropriation of Azerbaijan’s historical, cultural and religious heritage, plundering of natural resources, destruction of infrastructure and other violations of international law were duly documented and shared with the international community. In order to hold Armenia accountable for its breaches of its international obligations, as well as of the international humanitarian and human rights law, Azerbaijan filed inter-state applications against Armenia in the European Court of Human Rights and the International Court of Justice (ICJ). On December 7, 2021, the ICJ unanimously adopted provisional measures against Armenia based on the application filed by Azerbaijan.”

“Since the early days of liberation, Azerbaijan launched large-scale restoration and reconstruction works, including the implementation of key infrastructure projects, aimed at ensuring the safe repatriation of nearly one million of displaced Azerbaijanis to their homes and the revival of life in these lands. In accordance with the Trilateral Statement of November 10, 2020, Azerbaijan is taking proactive measures to achieve lasting peace and stability in the region,” said the ministry.

“On the contrary, Armenia fails to comply with the obligations it assumed by demonstrating a revanchism position, creating a serious threat to security by retaining the remnants of its armed formations from the region and by planting new landmines in the area. Moreover, Armenia takes almost no practical steps to open communications in the region, and continues its military provocations, thus seriously undermining post-conflict normalization efforts,” it added.

The ministry stressed that Azerbaijan acts as the initiator of the normalization of relations with Armenia on the basis of strict observance of the principles of international law, in particular sovereignty, territorial integrity, and inviolability of international borders.

“We call on Armenia to respect these fundamental principles to ensure peace, security, and prosperity in the region and comply with its international obligations. Armenia should finally put an end to imitation in the negotiations and take genuine, constructive steps. There is no other alternative for the peaceful development of the region,” said the ministry.

“September 27 is celebrated as Remembrance Day in our country by the order of the President of the Republic of Azerbaijan and today we remember with deep respect and cherish the memory of all our Martyrs who gave their lives for the independence, sovereignty, and territorial integrity of Azerbaijan,” the ministry concluded.