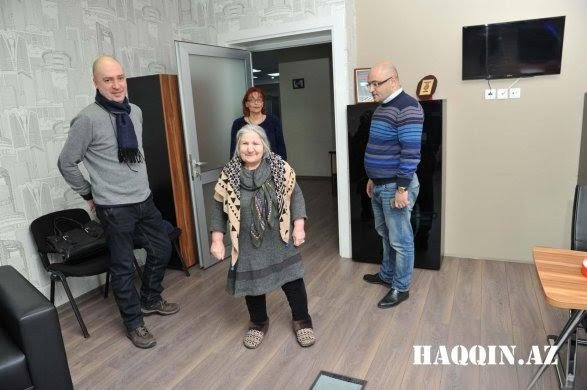 The dream of many of the Baku Armenians living outside of Azerbaijan, especially in Armenia, is starting to come true: they are returning to the city, which they left more than 20 years ago.

Sometimes, in the media and social networks, many of those, who left Azerbaijan in the early years of the Karabakh conflict, with a deep nostalgia and regret reminisce about their past life in Azerbaijan. For many of them, like the overwhelming majority of residents of Armenia ruled by the junta of Karabakh warlords headed by Kocharyan and Sargsyan, are daily confronted with social injustice and are deprived of basic political and civil rights.

One of them is Lida Ervandovna Balasanyan, who will in the near future receive documents on restoring her Azerbaijani citizenship. Lida Balasanyan has returned to Baku, and immediately with relatives visited the editorial office of haqqin.az (virtualaz.org , azeridaily.com).

In the editorial office of haqqin.az in Baku Armenian woman L.Balasanyan has been met by journalists of the Armenian section, headed by Yerevan journalist Susan Jaghinyan.

Lida Balasanyan was born September 20, 1940 in Baku. Her parents were originally from Shamkir (her father, for example, worked there as a firefighter).

Life of this 77-year-old woman was rich and complex. Her husband Mikayil Hasanov died in 1976 after a serious illness. Lida herself worked for 40 years. She worked at a textile factory, and in the Ministry of Social Security of the Azerbaijan SSR.

After arriving in Yerevan Lida Balasanyan never worked, received a miserable pension, ate occasionally in the dining rooms for the homeless. And this despite the fact that in Yerevan was living her brother Mais Balasanyan, with whom they did not get along.

Her children remaining in Baku have not heard anything about their mother for many years. Her son is a repairman, two daughters are still working as kindergarten nurses, third daughter is not working.

In 2009, the family accidentally learned that Lida Balasanyan was alive and destitute in Yerevan, as the majority of Armenian pensioners. It was decided to move her to Georgia. In the city of Rustavi in a rented apartment grandma Lida lived until December 2016. After the arrival of the Armenian civil society activists in Baku and the creation of the Armenian-Azerbaijani peace-making platform, especially after moving to Azerbaijan of Armenian activist Susan Jaghinyan, the Hasanov-Balasanyan family decided: it is necessary to take an elderly relative to Baku, where it is easier to care for her.

As grandma Lida's relatives tell, they have notified the state bodies of Azerbaijan, who did not prevent, and even helped to move an elderly woman to Baku.

'We are all very happy because of her arrival in Baku. This was made possible thanks to President Ilham Aliyev's policy aimed at maintaining the peace efforts of the civil society. All our family support this platform, and we want to join the ranks of the Azerbaijani and Armenian peace-makers. Soon, her great-grandchildren will fly from London. As for passports, we have already applied for restoration of her citizenship,' says daughter of Lida Balasanyan, Sevil Hasanova.

Lida Balasanyan has returned to Baku a month ago. During that time she has visited her numerous relatives, walked around the city.

'In Baku, I used to live in the Soviet street. Now quite a few familiar places are left here. Nevertheless, I liked the city very much. In Yerevan, there live many Armenians from Baku, whose dream is to return to Baku. Damn Sargsyan and other nationalists, who started the Karabakh conflict. After all, the Azerbaijani people have always been tolerant and kind. We have lived for centuries on this earth in peace and harmony. I am sure residents of Karabakh are tired of these fascists. And they all want to return to Azerbaijan,' says grandma Lida.

As for future plans, according to Lida Balasanyan, they are very simple: 'To live and enjoy life among friends and relatives in my native Baku.'